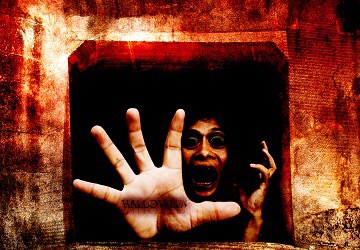 North, a brand new interactive and immersive horror escape room experience like no other, comes to The Great Northern Warehouse in Manchester from Saturday 1 August and will be laying down the gauntlet to visitors until Wednesday 23 December.

The set up in the Grade II listed building will be resembling something from the most terrifying of horror movies where the daring and fearless who enter are the stars, or rather, the victims. Having to pit their wits against mind numbing puzzles and elaborate clues to make it out alive and avoid being Trapped Up North.

Willing participants of groups of 3 – 6 are against the clock to complete their mission, with unthinkable consequences if they fail. There are two initial rooms of terror to choose from: Jigsaw, Quarantine and another Cabin Fever to be announced later this month. Each with a unique story and environment and a different menacing evil presence lurking and willing you to fail.
Only the pure will escape the Jigsaw room; finding themselves locked away in a makeshift torture chamber within the sinister world of The Judge, a prolific serial killer who has escaped from prison. Famous for subjecting his victims to a grotesque ‘purity’ test known as the Jigsaw, there is one hour on the clock to solve the Jigsaw or be forced to face The Judge.
Anyone who has imagined themselves as a government agent should take on Quarantine; a deadly virus, created by the government as a weapon for biological warfare, has been leaked and contaminated their compound. With fears that those trapped inside may already be infected, brave agents are required to enter the contamination zone to locate the antidote before the virus causes global extinction. There is just 60 minutes before those that enter will become exposed to the virus and are inevitably sealed in.
If these two rooms weren’t enough to terrify you can return to a third room which will go on sale later this month. Those that enjoy the tranquil outdoors and camping under the stars will wish they had stayed at home if they dare to endure Cabin Fever, when a night of camping turns into a nightmare of sheer terror.

A group of savage bloodthirsty locals have kidnapped a member of the group – the one with the car keys. The only way to get home is embark on a terrifying journey through the savage’s cabin in the woods in the desperate hope of finding the captive friend. But are they lying in wait for your visit?
Trapped Up North is the ultimate 4D gaming experience which has been created by horror attraction experts House of the Dead which is led by Richard Cottier, Sally Duguid, and Paul Jamison. Richard and Paul worked behind the scenes at the region’s hugely popular Farmaggedon.
Horror expert and Director of Evil at House of the Dead Ltd Richard Cottier said: “I’m immensely proud of the achievements that I and the team made with Farmaggedon. Our next venture in Manchester City Centre will bring not one but two large-scale horror attractions to the space that is The Great Northern Warehouse. Escape rooms have become incredibly popular in recent years, but we can promise an experience like no other. Trapped Up North is not for the fainthearted and we bring a wealth of experience in horror attractions to terrify anybody brave enough to take part. Our next attraction at the Great Northern will be announced soon so watch this space.”
Tickets go on sale at 12pm on Thursday 9 July for those brave enough to take on the challenge.

Groups must arrive 20 minutes before allotted time. Each session lasts for 1 hour.

Each Room may be booked by one group of up to 6 people per time slot.

Thousands of women will join the fight against cancer at Race for Life in...