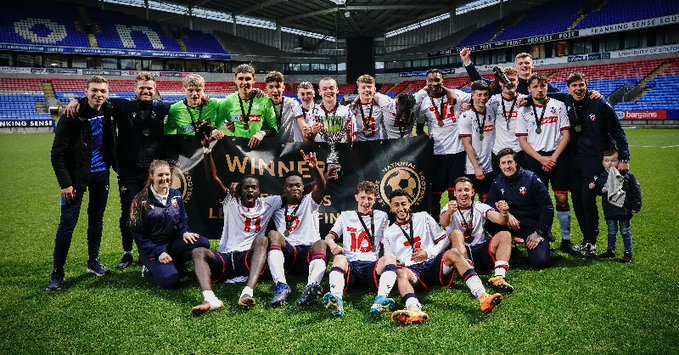 In the final at the University of Bolton Stadium, the Under 19 EDS beat Solihull Moors FC F&E team 4-1 thanks to goals from Nil Grau, Mohammed Nageeb, Mugalulu Obua Hashim and Danny Okunz.

The team is ran by Bolton Wanderers in the Community and has been developed in partnership with University of Bolton Group, namely, Bolton College.

The aim of the programme is to aid the development of young players through education and football, giving them the opportunity to go on to a higher education programme or follow a pathway into the game.

Still in its infancy, the programme has two male squads at under 17s and under 19s and season has seen the addition of the first female cohort.

Mike Bruns, head of service industries and curriculum leader for sport at Bolton College, said: “The lads have worked incredibly hard over the last academic year to perform at the level that they have, travelling all over the country to reach the finals, while managing their educational studies which have remained to a very high standard.”

Head of Bolton Wanderers in the Community, Ben Lawton, added: “Having developed the programme over the last three years, seeing the overall team success in winning a national title is very rewarding for all involved.

“It shows that when passionate organisations come together to create pathways for our young people, with sport as the catalyst to inspire, support and deliver positive change, success for those individuals will soon follow.

“We’re all immensely proud of what the students have achieved and hope the experience will motivate them to continue striving for success in the future.”

Sheridan: “I’ve Got To Build Confidence Into The Players.”