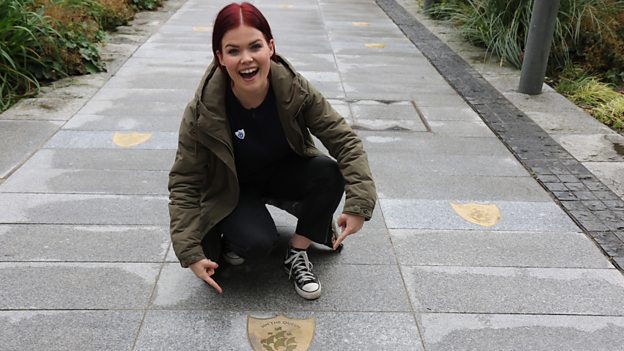 The Blue Peter Garden at Salford’s Media City was  the setting as Blue Peter unveiled its Gold Badge Walk.

The path will honour some of the well-known names who’ve received the special accolade – to celebrate the launch of the show’s 60th year and the walk joinsthe famous Blue Peter Garden to the CBBC’s studios.

The path was revealed today to viewers celebrating some of the most successful people in sport, literature, music and other industries to receive the prestigious accolade.

The walkway will be emblazoned with 44 giant Gold Badges, engraved with the names of stars including JK Rowling, Usain Bolt, Elton John, David Beckham, Tim Peake, Beth Tweddle, David Attenborough and even Her Majesty The Queen.

The newest big name to receive a Gold Badge – and earn their spot on the pathway – is iconic baker Mary Berry, who was awarded her badge at Henley Literature Festival last Friday (6 October). Viewers can see Mary receive her badge in tomorrow’s show.

Blue Peter will celebrate its 60th anniversary in October 2018 and has a host of special events taking place across the next 12 months to honour the occasion.

As part of the celebrations, the show will have its first ever guest editor, children’s author Jacqueline Wilson, who will be taking the reins on 19 October.

A special edition of Blue Peter on Thursday 1 February 2018 will mark the show’s 5000th episode. February will also see the launch of a new Diamond Badge – the highest honour fans and viewers can be awarded within the special 60th year.

Ewan Vinnicombe, Editor of Blue Peter, says: “We’re thrilled to launch our 60th year with our special Gold Badge Walk just a few steps away from the iconic Blue Peter garden. We’ve got such an exciting year ahead with many treats in store for our audience, across all generations, to celebrate the special place that Blue Peter holds within the UK. I’m so excited that Jacqueline Wilson will be our first guest editor with all her creative genius.”

Since the programme’s launch in 1958, the Gold Badge has been presented to individuals who show great expertise in their chosen field, are considered to be role models and inspire children across many generations.

Destinations: The Holiday & Travel Show returns to Manchester in 2019