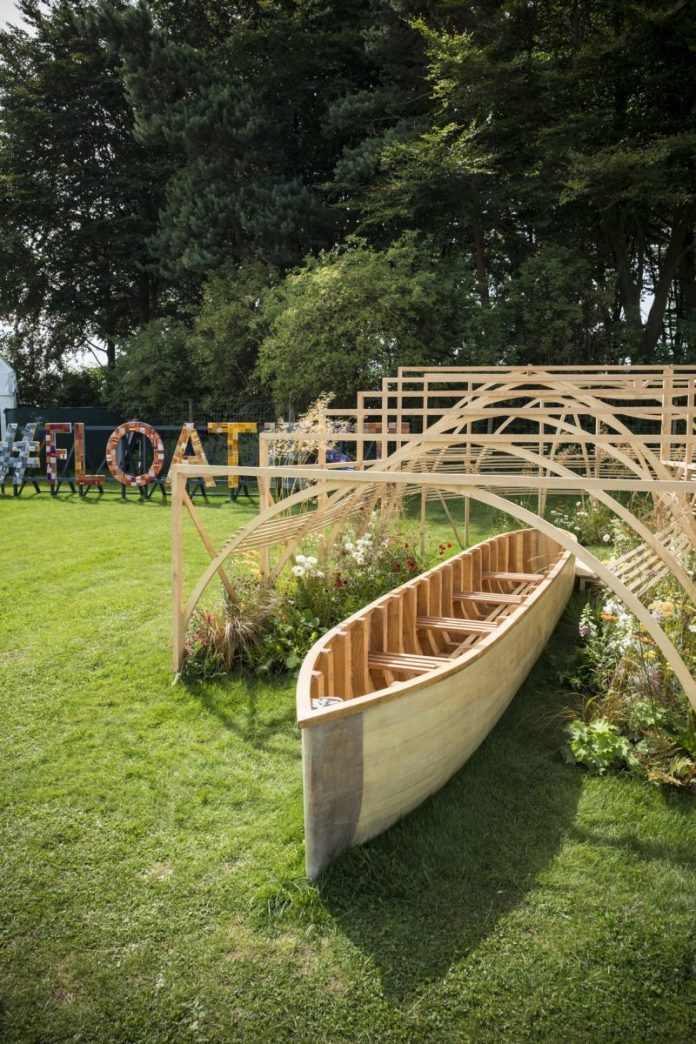 Bridgewater – Canal, Coal and Craft, inspired by the Salford stretch of the canal featured a 20 feet long wooden boat, which took volunteers 700 hours to hand build, and giant letters spelling #FLOATIEST which were covered with hundreds of knitted squares made by local residents.  Volunteers also greeted people at the RHS Tatton Flower Show, telling them stories about the canal’s history.

Designer Tim Denton created a series of wooden arches that echo the structure of the underground mines from which coal would be brought to the surface at Worsley Delph and transported by boat along Britain’s first true canal to Manchester. And all the plants reflected the canal’s unique orange colour – due to iron oxide in the water.

“This installation celebrates the uniqueness of the Bridgewater Canal in Salford. It’s an important piece of Britain’s history, the superhighway of its time and a catalyst for the Industrial Revolution, which has now softened into a  wonderful place to boat, walk, cycle and enjoy wildlife,”

“Our many volunteers  give so much time in so many different ways and I’m delighted they have won this award. Since the regeneration of the canal started volunteers have given over 5,500 hours of their time to plant trees, create flower meadows, develop a community orchard, improve paths and build benches. They make it the special place it is today.”

Both the boat and giant letters were created as part of Est.176, a programme of activities to inspire and engage local communities with the story of the Bridgewater Canal in Salford as it undergoes a £5.5 million transformation with funding from the Heritage Lottery Fund and Salford City Council.

The wooden boat was inspired by the boats used to carry coal from the flooded underground mines which were known as starvationers due to their exposed ribs. The modern tribute was built by nine local volunteers using wood felled from Worsley Delph and was launched on the canal in autumn 2016.

The four feet high knitting installation was created by dozens of local knitters, the youngest aged just seven and the oldest 93. Their first creation was the word #SWINGIEST which was on display beside the Barton Swing Aqueduct for five months earlier this year.

The informal planting, reflecting the canals change from industry to a haven for leisure, wellbeing and wildlife,  was designed by RHS Young Designer of the Year 2016 and Chelsea Gold Medal winning garden designer Caitlin McLaughlin from Thrift Landscapes.

The plants are now being re-used in local parks, and both the boat and the knitting installation will be on display at locations in Salford later this summer .

Struggling to sleep in the heatwave?

3 types of internal doors that will uplift your house