BETSY has confirmed details of a European headline in support of her much-anticipated, self-titled debut album which will be released on September 29th on Warner Brothers.

With her powerhouse vocal range, direct ear for hooks, no-nonsense attitude and unerring ability to locate the sharpest grid references of heartache in music, BETSY is a once-seen, never-forgotten pop proposition. Crossing elements of churchy soul, euphoric dance and soaring power ballads, her self-titled debut album is shot through with unflinching lyrical honesty, and draws from an unlikely musical background.

BETSY was born on a goose farm in rural Wales, finding her voice from campfire sing-alongs and the local eisteddfod (where she boldly covered Rage Against The Machine) to the powerhouse vocalists within her parents’ vintage record collection. Keen to pursue a career in music – but knowing nobody in the industry – she was encouraged by her hard-working family to find a fall-back, and moved to London to study fashion design at Central St Martins.

One distraction led to another when BETSY was invited to design catwalk for the esteemed Balenciaga in Paris: an intense, exhilarating experience filled with fascinating characters, but one that ultimately ate into her songwriting. And so BETSY returned to Wales, swapping what many of her peers deemed the job of a lifetime for making music in a grotty caravan in her brother’s garden (which you can glimpse across much of her artwork).

Over the run of her acclaimed early singles – ‘Fair’, ‘Lost and Found’, ‘Wanted More’ and ‘Waiting’ – BETSY has emerged one of the year’s stand-out voices. Yet it is everything else she absorbs into her debut album – influences across film, art, fashion, travel and relationships – which have cemented her diva credentials. ‘It’s important to have your look, your thing, to be so recognisable that a child could draw you and you’d still know who it is,’ she says. Someone once told BETSY that to become iconic, you should be identifiable by silhouette alone: come September, her debut album suggests that BETSY is well on the way to making this picture a reality.

Beginning at Swansea’s National Waterfront Museum on November 23rd – and including Manchester’s Gorilla on the 29th November and BETSY’s biggest headline show to date at London’s Scala on November 30 – tickets go on general sale this Friday at 9AM via http://betsymusic.co.uk/. 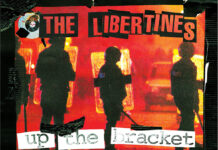 Craig Charles Announces A Double Date Of Music At The Lowry