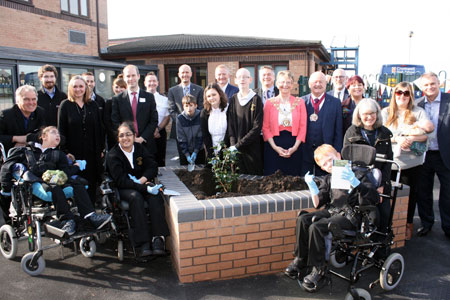 PUPILS celebrated the reopening of their fire hit school with a message of hope for the future.

Cromwell High School in Dukinfield was severely damaged during a fire in April 2016, forcing pupils and staff to move to temporary accommodation at Inspire Academy in Ashton.

The school, which caters for children with special educational needs and disabilities, has since been rebuilt with extensive new facilities and reopened to pupils at the start of the new term in September.

Children officially marked the reopening on Wednesday 18 October by planting a tree and spring bulbs while also hanging hand-made bunting, which they had decorated, with their wishes for the future.

They were also joined in a celebratory assembly, attended by special guests including Tameside Mayor Cllr Joyce Bowerman, Council Deputy Executive Leader Cllr John Taylor and Executive Member for Lifelong Learning Cllr Lynn Travis. Guests were also served refreshments in the schools’ tearoom – which is open to the public most days to give pupils valuable work experience.

New facilities included in the rebuild include three news classrooms, a social hub, an art gallery, an ICT suite, a glass atrium, a calm room with outside access, an outdoor adventure trail and new outdoor play surfaces and planters.