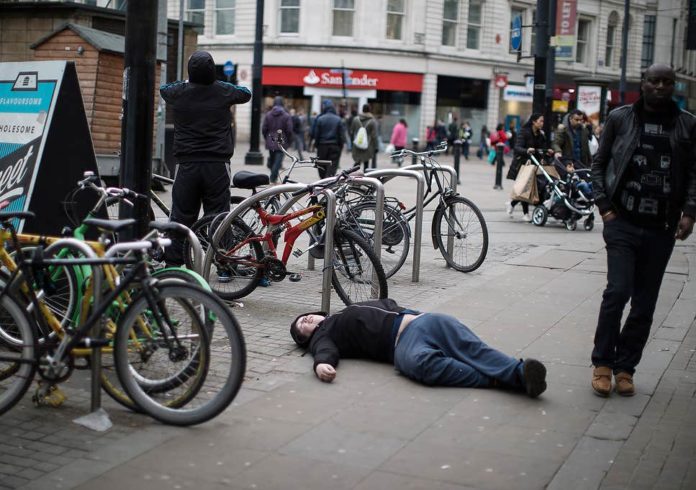 Spice’s popularity among some members of the homeless community causes a uniquely dangerous cocktail of physical, mental and societal harms that must be addressed through effective service reform, the first in-depth study of its kind shows.

Despite the widespread media coverage and public health concerns in recent years over the harms linked with Spice, research conducted by experts from Manchester Metropolitan University in the months either side of the introduction of the Psychoactive Substances Act in May 2016 is the first to speak to homeless users about their motivations for taking Spice and harms associated with use.

The results, published in the journal Addiction Research & Theory, show that in spite of the introduction of the Psychoactive Substances Act in 2016 that prohibited the sale of Spice and other former ‘legal highs’ from high street shops, Spice has continued to be widely used within the homeless population.

This is because of a combination of the drug’s high potency and low price, and difficulty to detect when used in public places and temporary accommodation.

The findings and recommendations have resulted in Manchester leading the way in the response to managing Spice use and in reducing harm, including the establishment of a city-wide warning system for harmful substances and the development of bespoke practitioner training on Spice awareness and first aid.

However, the report authors argue that the motivations and harms caused by Spice use among homeless people in particular remain poorly understood, and their findings can influence effective service reform in cities and countries who currently lack this evidence base.

Dr Paul Gray, report co-author and Senior Lecturer in Criminology at Manchester Metropolitan, said: “Despite the 2016 Psychoactive Substances Act leading to the demise of high street outlets selling new psychoactive substances in the UK, Spice remains easily accessible to the homeless population. As was the case in Poland and Ireland, rather than reducing use, tougher legislation has simply displaced Spice from the high street to the illegal street market. Our 2016 research still resonates today as the most in-depth study within the homeless population of their motivations for using Spice, and the unique harms caused as a result, and we therefore hope that it will help change the ways we treat and support users.”

Spice use is also increasingly being linked directly to deaths – with 60 such cases in 2018 alone. Users also reported turning to crime to fund dependent use, often against fellow homeless users, leading to increased vulnerability and victimisation within the homeless population.

The report argues that, instead of further legislative reform to the problem of Spice use within vulnerable groups, reform should prioritise improved access to medically supervised community detox and in-patient rehabilitation for dependent Spice users, along with the capabilities of treatment services to address the co-existence of mental health problems and substance use.

Dr Robert Ralphs, report co-author and Reader in Criminology at Manchester Metropolitan, said: “It’s evident that the emergence of Spice use within the homeless population has made life on the streets more unpredictable and hazardous. It’s clear that there needs to be a more holistic and tailored service response that addresses the mental health needs of users and provides easier access to detox and rehabilitation services.”

Reducing the number of cattle and sheep in the UK will help prevent climate...