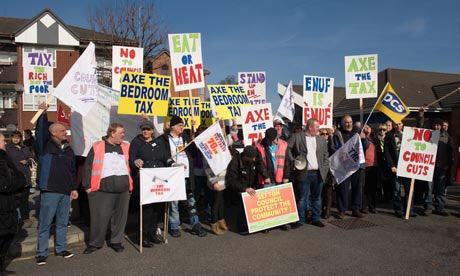 The government’s ‘bedroom tax’ is leaving children hungry and stressed at school, according to a new study by education experts at The University of Manchester
In the first piece of research to examine the impact of the controversial welfare policy on children and their education, academics found that the introduction of the so-called ‘bedroom tax’, alongside other cuts in benefits, was having an adverse effect on pupils’ ability to learn and concentrate, with the emotional distress caused by poverty taking its toll on schoolwork.

It also found that forcing children to share bedrooms – required under the government changes which reduce housing benefit for those judged to have ‘spare rooms’- was having a negative impact on schooling by leaving youngsters without a quiet place for homework or undisturbed sleep.

The qualitative study, which carried out in depth research with a small group of parents, schools and community organisations over a 16-month period, is published by the Manchester Institute of Education at The University of Manchester.

Experts are warning that it is time for the government to review the policy.

Professor Ruth Lupton, from The University of Manchester, said: “The findings of this study confirm a wider picture emerging from research which points to the bedroom tax failing to meet its original aims while contributing to significant hardship among low-income families.

“Our study suggests that the pressure put on families by this cut in benefits may also be working contrary to other policies that are intended to support child wellbeing and educational achievement, diminishing their effectiveness.”

Professor Erica Burman added: “The government should review its policy. Doing so would show a greater commitment to supporting children, helping parents to maintain their responsibilities, reinforcing communities, tackling educational inequalities and ensuring that the effects of austerity do not fall disproportionately on poor families.”

The government introduced the reductions to housing benefit for those judged to have ‘spare bedrooms’ – a move dubbed the ‘bedroom tax’ – in April 2013, among a raft of benefits changes affecting the incomes of working-age adults. This led to a reduction in housing benefit payments of an average £11-a-week (£572-a-year) for those deemed to have one ‘spare’ bedroom and more for those with two.

The early piece of research from The University of Manchester found that parents were saving money by cutting back on food, heating and other essentials and foregoing warm winter clothes, shoes and school uniforms for their children as a result of the reduction in benefits. Families were becoming more isolated and children’s access to friends and after-school activities were reduced. Some parents said they were regularly going without meals so that their children could eat.
School staff interviewed as part of the study told how children were showing signs of emotional distress caused by the effects of poverty, including seeing the pressure felt by their parents, and that material hardship was adversely affecting their ability to learn.,
Schools and community groups explained how they had responded to the benefit changes by reallocating their finances, staffing and care services to prioritise feeding and clothing children. Pupil premium funding, for example, had been used to extend breakfast clubs, while one school had opened its own account with a shoe shop.