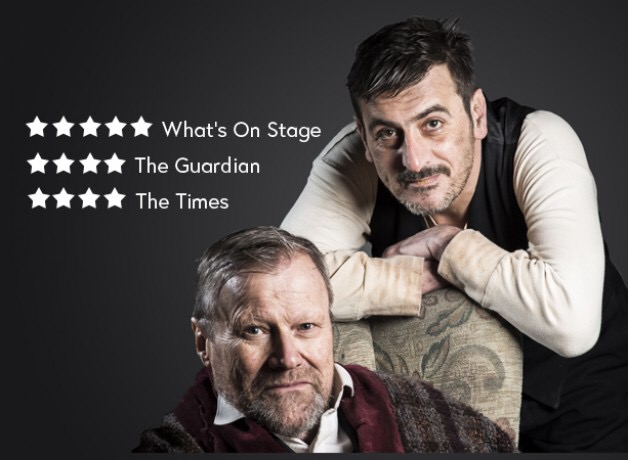 Coronation Street actors David Neilson (Roy Cropper) and Chris Gascoyne (Peter Barlow) star in Endgame, Samuel Beckett’s absurdist masterpiece about death and mortality, in a co-production between HOME and the Citizens Theatre, Glasgow which premiers this week
Endgame is classic Beckett, finding laughter in the darkness in an absurd and macabre play which, melding tragedy and comedy, makes a grim joke of life.

Languishing between life and death, the chair-bound tyrant Hamm and his dutiful but resentful servant/companion Clov are irrevocably bound to one another. They pass their days in a filthy bare room, caught in a futile loop of pointless routines. Their endless and brutal verbal jousting match is punctured only by the nostalgic reminiscing of Hamm’s crippled parents, Nagg and Nell, reduced to living in rubbish bins.

One of the unspoken themes in the play is that having someone else around, even an irritant, can help to assuage the pain. But Hamm and Clov’s unwillingness to face this pain alone somehow makes the pain greater, and their complementary, dominant-submissive pairing – a staple of Beckett’s plays – highlights their numbing dependency. Beckett compared Hamm and Clov’s tense co-dependency to his own relationship with his wife in the 1950s; both wanted to leave the other, but were afraid to face life alone.

David Neilson, Roy Cropper in ITV’s Coronation Street, is no stranger to Beckett, having appeared as Lucky in the Library Theatre Company’s Manchester Evening News Theatre Award-winning production of Waiting For Godot in spring 2008.
“Chris and I have wanted to do Endgame for quite a while,” says David Neilson. “We are both very excited to be working with Dominic Hill as we really enjoyed his recent productions at the Citizens. I am looking forward to going back on stage for the first time in eight years, and to performing at HOME, which is a wonderful new cultural asset for Manchester.”

Chris Gascoyne has appeared a wide range of theatre throughout the UK, most recently as Ray Say in Little Voice at the West Yorkshire Playhouse and Birmingham Repertory Theatre. He played Peter Barlow in Coronation Street for 15 years until 2014.
“I have had a strange obsession with the works of Samuel Beckett since I was a young actor studying at the Royal Central School of Speech and Drama some 25 years ago,” he says, “so I feel very privileged to be given this rare opportunity to perform in one his greatest plays alongside my friend and fellow actor David Neilson. I am looking forward to working both in Glasgow and Manchester under the direction of Dominic Hill, with whom I have wanted to work for some time.”