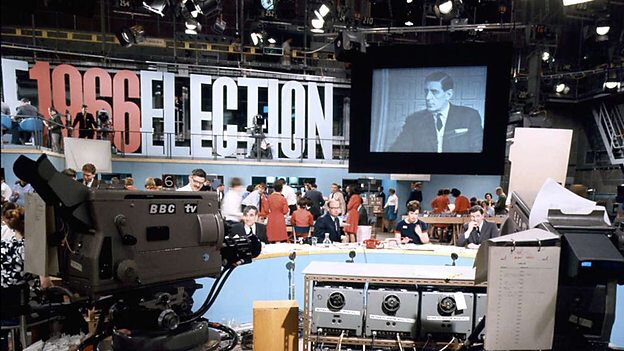 Bored of the election already? The BBC has today unveiled a new archive site that gives the public a fascinating insight into the BBC’s coverage of elections since its inception in 1922.

The archive jointly put together with the University of Sussez, and which can be viewed at bbc.co.uk/historyofthebbc/elections, contains a wealth of video footage, including footage of every General Election since the BBC first introduced televised coverage of elections in 1950.

There are never-seen-or-heard-before video and audio clips with key BBC figures and senior politicians including Harold Wilson and Tony Benn. As well as video and audio, the site includes downloadable written archive documents, some of which have been made available for the first time. New interviews with key figures in the history of election broadcasting (such as Sir David Butler) have also been added to the site.

Apart from election coverage, the site includes pages on the development of the political interview, the broadcasting of Parliament, and the history of party political broadcasts.

This election archive is the first site to be unveiled as part of the 100 Voices That Made The BBC project, an oral history of the BBC produced in collaboration by the BBC and the University of Sussex. The project will be completed in 2022, the year of the Corporation’s centenary, and further content will be added on other subjects over the next seven years.

Some highlights of the Election site include Grace Wyndham Goldie talks about the invention of the TV election night coverage in 1950: how she drew out the plans for the first programme on a table cloth over lunch one day and newly available conference papers from 1958 reveal the debate around coverage of election campaigns by broadcasters (up to that date The representation of the peoples Act made it impossible to cover election campaigns on TV or radio)

Harold Wilson speaks about how he asked for an episode of Steptoe and Son moved on the night of the 1964 vote, because he feared it would affect turnout. Sir Hugh Greene speaks about the BBC’s response to this request and Margaret Douglas talks about the challenge of putting TV cameras into the Houses of Parliamen

Also featured are copies of the election editions of every Radio Times since 1922. The 1929 edition has a chart so listeners can fill in their own scores as the results are read out. The 1931 and 1935 editions contain notes reminding listeners not to ring the BBC to ask for the results.

Speaking about the project Professor David Hendy, Director of Research and Knowledge Exchange in the School of Media, Film & Music at the University of Sussex said:

“In this particular set of interviews and archives on 70 years of election broadcasting, we’re hoping that we can reveal a clearer picture of how the style of politics on TV has evolved. The interviews show some of the ‘hidden wiring’ behind the machinery of broadcasting – the personal motivations, the chance encounters, the networks and connections, the arguments and disagreements that have sometimes been crucial to the development of TV and radio.

“Oral history is rather beautiful at reminding us that the media are not always about policies and structures and formats: they also involve the action of pioneering individuals; they offer a human face and human voice to what might otherwise be a rather impersonal account.”

Speaking about the 100 Voices That Made The BBC he added:

“This is a huge – and hugely exciting – project. Many of the figures are famous, for example former Directors-General, politicians, leading programme-makers and presenters, but others are more obscure – known by BBC insiders perhaps, but not by the rest of us. Our task at the University of Sussex has been to spot the connecting threads between the different interviewees, to unpack the background to their accounts, to draw on other material in the written or programme archives as well as scholarly work on broadcasting history, in order to put all these interviews into a much broader historical context.

“The great thing about doing the history of the BBC is that, by default you find yourself doing the history of British life. You can listen to an interview – or open a file of memos – and be confronted with a description of a meeting with the Prime Minister at one moment and a discussion of the appeal of a TV comedian the next. In all senses, though, its history is our history.”

“We are delighted to be collaborating with the University of Sussex on this unique oral history collection, which reveals the fascinating story of how the BBC created election broadcasting and opened up the wider UK democratic process to audiences. It’s an illuminating and invaluable resource for anyone interested in the milestones of UK history.”

A bizarre new species has arrived at Chester Zoo