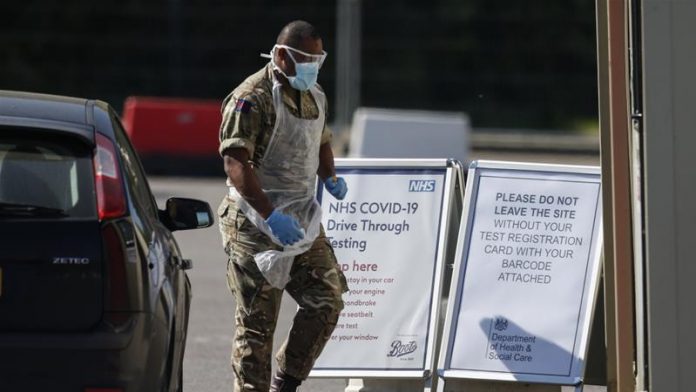 Relaxing stay-at-home orders and allowing some types of non-essential businesses such as shops to reopen are the lowest risk measures to get the UK and other European countries out of lockdown – according to research from the University of East Anglia.

Researchers studied the success of different social distancing measures across 30 European countries – in terms of how effective they have been at reducing the number of Covid-19 cases and deaths.

They found that closing schools, prohibiting mass gatherings and the closure of some non-essential business, particularly in the hospitality sector, were the most effective at stopping the spread of the disease.

Enforcing the wearing of facemasks in public was not found to make additional impact.

Due to the rapid-response nature of this research, it has not yet been peer-reviewed.

But it is hoped that the findings could help policy makers decide the next steps for carefully lifting Covid-19 lockdown measures.

Lead researcher Prof Paul Hunter, from UEA’s Norwich Medical School, said: “The Covid-19 pandemic is unparalleled in recent history as are social distancing interventions, which have led to a significant halt for the economy and people’s social lives around the world.

“Countries across Europe have dealt with Covid-19 in different ways. We wanted to see which social distancing measures are most effective at controlling the pandemic.”

The researchers looked at the number of cases and deaths taken from daily published figures by the European Centre for Disease Control. These were compared with the start dates of different non-pharmaceutical control strategies.

The measures looked at included restriction of mass gatherings, the closure of schools and different types of businesses, stay at home orders, and the wearing of face masks.

The study is one of the first analyses that tries to determine what the most effective community scale interventions are, at least in Europe.

It shows that imposing non-pharmaceutical measures have been effective in controlling the spread of Covid-19. But not all interventions have been equally successful.

“But widespread closure of all non-essential businesses and stay-at-home policies do not appear to have had a significant effect on the number of Covid-19 cases across Europe.”

There has been a lot of uncertainty about whether schools and nurseries should be closed – particularly given that children seem to show mild or no symptoms.

Throat swabs from children have shown similar viral load to those in adults, yet other studies have not found evidence of children transmitting the infection to adults.

Prof Hunter said: “Our study shows that school closures in Europe had the greatest association with a subsequent reduction in the spread of the disease.

“But this study does not resolve the lack of consensus about whether children can pass Covid-19 to adults. And it does not identify which level of school closure has the most impact whether it is primary, junior, senior school or even higher education.

“It’s also important to remember that our results are based on total closure, so it is possible that partial school closures could have worthwhile impacts on the spread of infection.”

Banning public and private mass gatherings had the second greatest impact on the spread of Covid-19. These findings are backed up by past experience.

Prof Hunter said: “In the past there have been several outbreaks of other respiratory infections linked to music festivals. For example, in 2009, outbreaks of swine flu were recorded at three of Europe’s six largest music festivals, while at one point some 40 per cent of pandemic flu cases that season in Serbia were linked with the Exit music festival.

Stay-home policies were not associated with a decline in incidence, and actually showed a positive association with cases. As the number of lock-down days increased, so did the number of cases.

Dr Brainard said: “This result really surprised us and shows that stay at home orders may not be required to control the outbreak, provided that this does not lead to more mass gatherings.

“However there have been considerable differences in how countries have carried out stay-home policies.

“Acceptable reasons for being outdoors has varied between countries, and stay-home orders in some countries have been advisory rather than enforced by police with penalties.

“Because of this, the results for the potential of stay-home advisories may be under-estimated.”

The study found that the first wave of non-essential closures in each country had the biggest impact on the spread of infection. Those initial closures tended to be directed at businesses where people congregate such pubs, leisure centres, restaurants and venues.

Prof Hunter said: “This suggests that keeping some businesses closed, particularly in the hospitality and leisure sector, would have the most impact.

“However, we also know that while outbreaks of food poisoning are frequently linked with restaurants, outbreaks of other respiratory infections generally in the hospitality sector are fairly rare.

“The closure of other types of business, such as non-essential shops, seems to have made little impact on the spread of Covid-19.”

Wearing facemasks in public was not associated with any independent additional impact. But the researchers say these results are too preliminary to reliably inform policy.

Dr Julii Brainard said: “The use of face coverings initially seems to have had a protective effect. However, after day 15 of the face covering advisories or requirements, we saw that the number of cases started to rise – with a similar pattern for the number of deaths.

“Face coverings may even be associated with increased risk, but the data quality for this is very uncertain.

“The results on face coverings are too preliminary to reliably inform policy, but what results are available do not support their widespread use in the community.

What this study doesn’t tell us is exactly what the mechanisms of these associations may be.

Prof Hunter said: “We looked broadly at a range of interventions but there will be a lot of granular difference between countries. For example in Sweden schools for under 16s stayed open, but schools for over 16s, universities and colleges have been shut.

“It is important to remember that single epidemiological analyses do not prove cause and effect, especially where multiple interventions have been implemented very close to each other as in the case here.

“It is vital that we carefully monitor the future trajectory of the pandemic as restrictions are gradually relaxed across Europe, only then will we know with greater certainty what interventions were beneficial and what were not”.

New Director and 100K of deals for Manchester’s Urban Splash