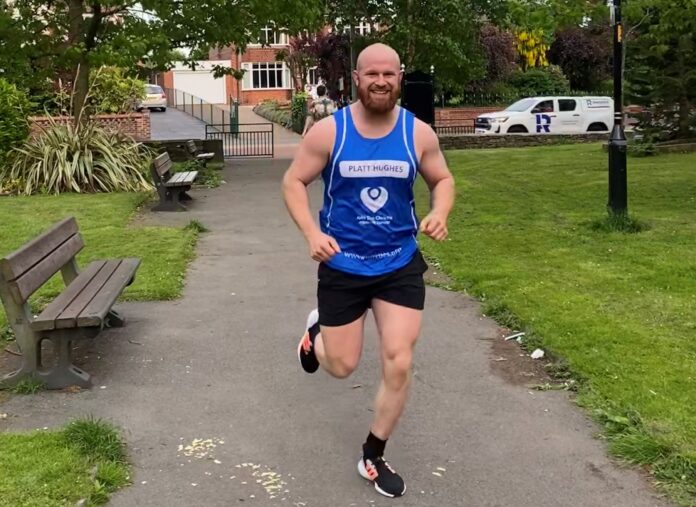 An engineer from Audenshaw will run his first London Marathon this year to raise money for The Christie after his brother Ben, 25, was successfully treated for stage 4 Hodgkin’s Lymphoma by Manchester’s specialist cancer centre.

Ashley Platt Hughes, 28, has been chosen as one of just 22 Christie fundraisers to take on the challenge of London’s famed 26 miles and 385 yards run. Ashley’s grandfather was also successfully treated at The Christie.

“My brother and I have a special bond and are best mates,” said Ashley. “Ben won’t believe this, but he is definitely an inspiration to me. We have travelled the world together on trips we will never forget and have helped each other renovate our homes. Seeing his health deteriorate from cancer and watching him struggle was unexpected and heartbreaking.

“Ben is six foot three and he makes sure to constantly remind me of this. He is a talented engineer and good at making people laugh but a dreadful dancer. He loves animals and recently spent nine months in Thailand volunteering in a dog and cat orphanage. He is hoping to head back out there now that he has had his all clear.

“Shaving my brother’s head when his treatment started to take effect was such an emotional moment, but Ben smiled and joked throughout the whole process, and I know it was to protect his family. He really did hold it together during his treatment to help make things easier for our parents and all the family, me included.

“The Christie means the world to me as it saved my little brother’s life. I cannot be any more grateful. Running the London marathon is my way to thank all the staff at The Christie for the love and support they gave Ben and give to all patients. It’s also my way to show Ben that I couldn’t be prouder of him for the courage he has shown whilst being treated for cancer.

“Once The Christie started treating Ben, month by month his health improved. The whole process, whilst so tough, was manageable due to The Christie, and we as a family are so lucky that Ben’s treatment was a success.

“I’m running, not just for my family, but for everyone affected by cancer. There is no one who hasn’t been touched by cancer in some way. I want to show how people support each other and help each other get through cancer.

“Anyone who donates can leave a short message which I will run with on my shirt, shorts and hat, whether it’s motivation to those being treated for cancer, a memory of a loved one, or to celebrate someone completing their treatment, I’ll be proud to run with it. Completing the marathon with lots of people’s messages will be very humbling and I know that the money I raise for The Christie will help other people.”

Ashley has always wanted to run the London Marathon. “It’s definitely on my bucket list,” he said. “The London Marathon atmosphere has always looked amazing with lots of people supporting each other whilst raising money for great causes close to their hearts. It should be a fantastic day for my family too.”

The London Marathon isn’t the first fundraising Ashley has done for The Christie. Together with a group of six friends, he raised £6,500 by climbing Snowdon and Scafell in a day. “Every donation had a positive impact on my brother as he was going through treatment,” said Ashley. “The donations helped keep his motivation up as it showed that so many people were thinking of him.”

Although Ashley has never done any long distance running, he enjoys bodybuilding and trains around four times a week, complemented with running, cycling, swimming and hot yoga. He started running whilst in high school before focusing on rugby. Running isn’t Ashley’s favourite activity but despite being injury prone he admits to being very competitive and likes to beat his previous times. He is hoping to finish the London marathon in less than 5 hours.

Ashley is thoroughly impressed with the support he has been given by The Christie charity since signing up for the London Marathon. “They have been brilliant, constantly keeping me updated at each step,” said Ashley. “I’ve had lots of support and been given a Christie charity branded running and training kit.

“I am a proud Mancunian and to have such an amazing world-renowned life-saving cancer centre on our doorstep is something we should all be proud of.”

To support Ashley, please visithttps://www.justgiving.com/fundraising/ashleyplatthughes or to find out more about running The London Marathon for The Christie please visit www.christies.org/londonmarathon.

Wellbeing of almost two thirds of adults with learning disabilities has worsened under COVID,...

To the minority who feel the restrictions don’t apply to them be prepared to...