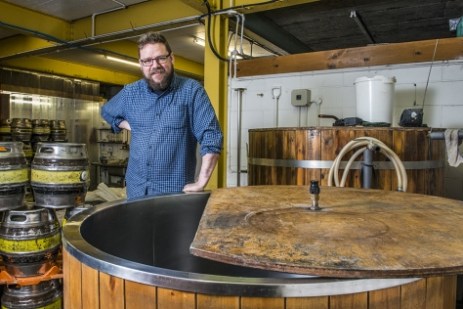 A painter and art lecturer at Manchester Metropolitan University is to help revive a forgotten beer by piecing together its history and the recipe – and then creating the label artwork.
Dr Magnus Quaife is undertaking research to bring back Old Tom, a strong dark ale produced by Ashton-under-Lyne’s famous Gartside Brewery and a popular pint until the brewery closed down in the 1960s.
The project is part of an art commission taking place at Portland Basin Museum in Tameside where this summer Magnus will host workshops and invite members of the public to share their brewery and beer memories to generate ideas for the new bottle labels.
Magnus, a lecturer in fine art, said: “I’ve teamed up with a local brewer, Millstone, who will be helping me to make and bottle some beer made to the original Gartside’s Old Tom recipe.

“As well as wanting to hear from anyone who might be able to shed some light on the original Old Tom ingredients, I would also love to hear from people who have memories of Gartside’s and its beers.”

The name of Gartside’s Old Tom is reputedly either a reference to Captain Thomas Gartside, a relative of John Gartside senior who founded the brewery, or the head horse keeper Thomas Bell who served the company from 1876 until his death in 1907.
Magnus said: “This is a different beer from the Old Tom brewed today by Stockport’s Robinson’s brewery.
“I believe that if a recipe for the Gartside’s version is to be found it will be either at the National Brewery Museum Archives in Burton, or with the family of Mr Lucas, a former head brewer.”
The new brew will be called Old Thomas Bell, named after the brewery’s head horse keeper.

As well as piecing together the recipe so Millstone Brewery in Mossley near Oldham can brew the beer, Magnus will be collecting stories from anyone who has memories of Gartside’s brewery and the drinks it produced.
These will be included in a magazine which will be published later in the year, at the same time as the revived beer is launched.

Locals are also invited to attend a series of free workshops at Portland Basin Museum in Ashton-under-Lyne where they can work with Magnus Quaife to create posters inspired by the area’s brewing history.
Elements of the artwork will then be used to create labels for the new bottles of Old Tom.

Rachel Cornes, manager at Portland Basin Museum, said: “Gartside’s was one of the biggest brewers in the region and it employed a lot of people – there must be thousands of local people who remember the brewery or drank their beer.

“This is a fantastic opportunity to do something different here at the museum and to celebrate a part of Tameside’s past which was so significant in its heyday.”

Anyone who has memories of Gartside’s brewery to share can get in touch with Portland Basin Museum on 0161 343 2878 or via email on portland.basin@tameside.gov.uk.

The workshops with Magnus Quaife will take place at Portland Basin Museum from 11am to 3pm on June 27, July 12, August 2 and August 16 and check the museum website for more details – www.tameside.gov.uk/museumsgalleries/education.

Hepton Singers at Chetham’s this Sunday