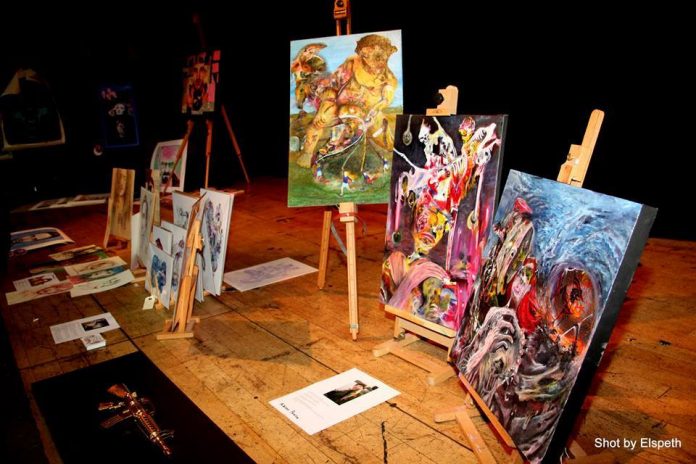 Manchester’s best kept secret, the phenomenal Art Battle will be staging A NIGHT OF HIGH DRAMA in one of the cities most inspiring spaces, the stunning Royal Exchange Theatre on Sunday 6 May from 7pm.

This latest Art Battle sees a number of local artists from painters, street artists, tattooists and illustrators take centre-stage at this unique theatre in this special one-off event.. Hosted by broadcaster/DJ, Hattie Pearson, A NIGHT OF HIGH DRAMA will mix up the new artists with DJs, art exhibitions, street food, a licensed bar and all manner of unexpected shenanigans.

Resembling a lunar space craft, set down amidst the glass domes and towering columns of this Grade II listed building, the Royal Exchange is the largest theatre in the round in the country and is the prefect setting to get the creative juices flowing.

The evening will be filled with theatrical and musical surprises and feature a number of pop up performances around the building Since its conception in 2013, Art Battle Manchester has delivered 10 sold out battles across the city in mills, warehouses, music venues, theatres, a skate park and even an old fire station! Art Battle Manchester co-founder, John Macaulay wanted to create an art-focused event with a theatrical atmosphere, making it accessible to everyone:

“It’s Manchester’s most energetic art event. We help turn artists into ‘art stars’ and the huge crowd – many of whom have never set foot in an art gallery – really play their part too.”

Artwork created LIVE on the night will be auctioned off during the event, with all proceeds raising money for The Royal Exchange Theatre charity which runs a number of programmes to support theatre makers in the city, including the award winning Young Company and Company of Elders.

Art Battle Manchester ALWAYS sell out, so don’t leave it too late to get tickets sorted.