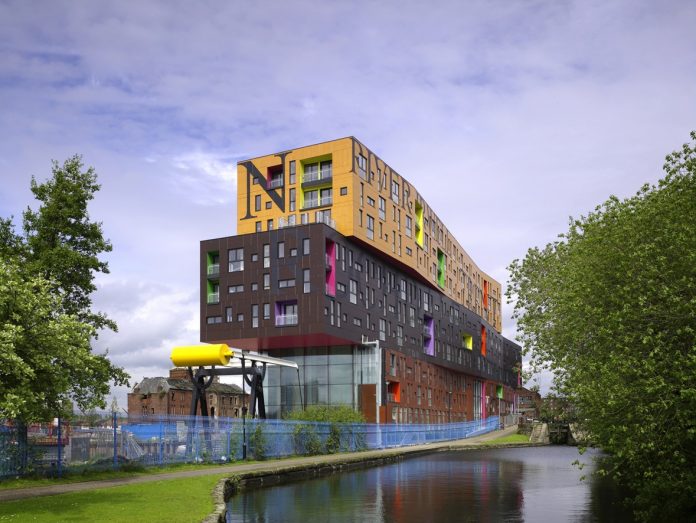 The Architect Will Alsop, best known in Manchester for the iconic Chips Building in New Islington has died at the age of 70 after a short illness.

Born in Northampton in 1947, Alsop studied at the Architectural Association in London. He cited 20th-century modernists Le Corbusier and Mies van der Rohe and 18th-century British neo-Classicist John Soane among his influences.

The nine-storey block of 142 one, two and three-bedroom flats first opened in 2009, was part of a masterplan, developed by Alsop after consultation with residents of the blighted Cardroom estate, put into development with the help of Urban Splash, the brainchild of Manchester Entrepreneur Tom Bloxham MBE.

Alsop’s masterplan for the area, proposed infiltrating the site with water, and creating a series of ‘fingers’, long, narrow peninsulas carrying oblong apartment blocks, with a scattering of cafés and other facilities to enliven the quays and Chips became the first of the fingers.

The building itself, a concrete frame clad with colourful composite panels declaring the glory of canals and rivers, stands as a testament to the architect who said that the test for a building’s success is if the cabbies know it. Do you get in a taxi at the station and ask for Chips and get the reply: “You mean that hideous building with writing on it?”

Dérive picks up keys for new affordable homes in Charlestown