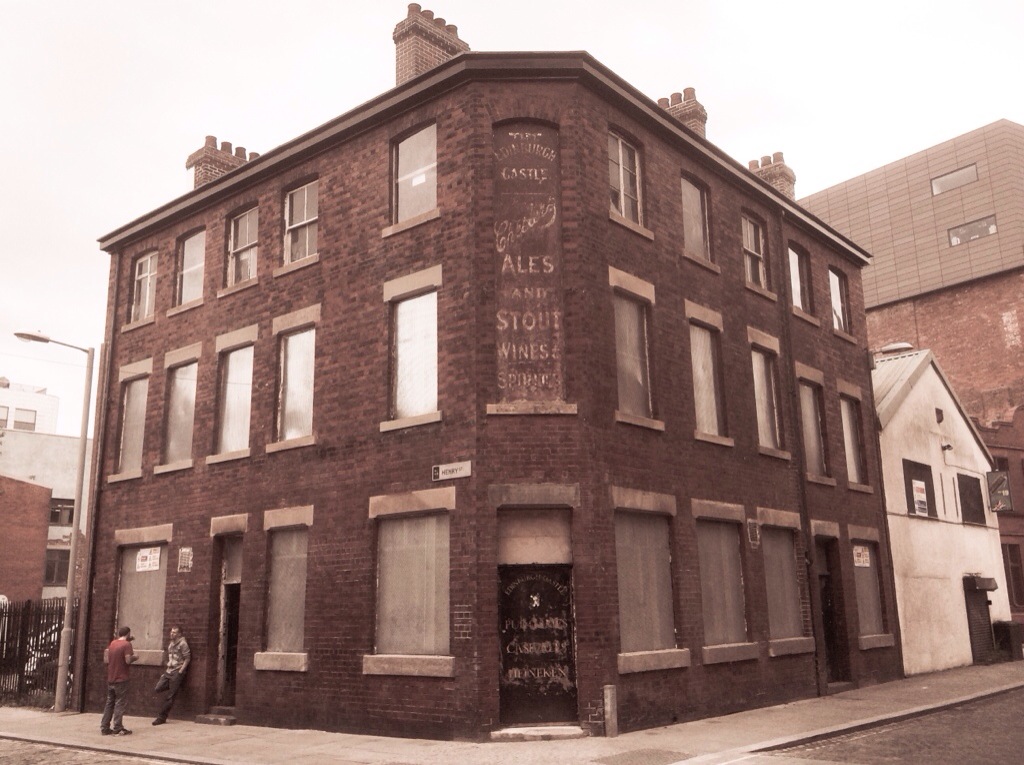 The name Angel Meadow conjures up the worse side of rapid industrialization, it was to Engels simply ‘hell on earth’, but this month it will also be associated with the birth of HOME, the city’s new £25m centre for theatre film and art which is due to open in twelve months time.

Angel Meadow will be the first in a series of site specific productions put together by Dublin’s hugely acclaimed site-specific theatre specialists ANU Productions, which will be taking place around the city ahead of next years opening.

The world premiere of the play, which runs from the 10th until the 29th of June, has been inspired by the stories of Irish immigration to nineteenth century Manchester escaping from famine for a better life in the booming industrial Cottonopolis.

The site specific location of this production will be the Edinburgh Castle public house on the corner of Henry Street and Blossom Street in Ancoats.

The pub, which dates back to the 1840’s was, being behind the old Daily Express building on Great Ancoats Street a favourite haunt of printers, compositors.

It has been closed since 2002, lastly and for many years with a West Indian landlord called Les, after the pub became a battle ground for football supporters after Wrexham played at Oldham, the premises, according to a police spokesman, all the windows had been smashed in and the furniture was wrecked.

When ANU Productions, came to Manchester last summer to look for locations they knew quickly that Ancoats was the right place to go.

Director Louise Lowe had never heard of Ancoats before she arrived in Manchester but the Edinburgh Castle was quickly selected as the perfect for a background to the story of contemporary life and picked an empty pub.Sixty six thousand people came to Ancoats after the Irish famine.Besides dispensing alcohol, the premises were used as an inquest location.

What we liked about the Edinburgh Castle pub was the amount of detail about the stories and characters we found out, which is not very often given to you. We spent four or five hours on the first evening shouting things to each other like ‘look what I’ve found!’ We’re not making a documentary, but the research underpins all of the work we make.

Death stalked this part of nineteenth century Manchester, it was said that the devil visited on a Saturday encouraging young girls to drink bleach to end their helpless lives, while funerals, ten a penny, would attract children with the lure of free ice cream.

The play attempts to capture the environment of the place with The Irish and Italians living together squeezed tight in almost perpetual darkness.It will be “A communion involving the audience” says Louise and as an hor drive the assembled journalists were given a taste of what we can expect, audience participation in a funeral scene, a wife lamenting for the murdered boyfriend in the bar, the sandwiches, the drinks and the fights.

ANU are renowned for their interdisciplinary approach and we are, according to the press release a work ” influenced by the savagely imbued consciousness of post war slaughterhouses in Paris to the smog fuelled work ethic and unionism of Britain’s industrial workers.

Indeed the storyline will vary according to the reaction of the audience, lasting around an hour , there will be two hundred and thirty different performance starts over twenty five days.Enjoy

Tatton Hall continues its climb in the country’s visitor attractions

For one week only a new paper for Manchester