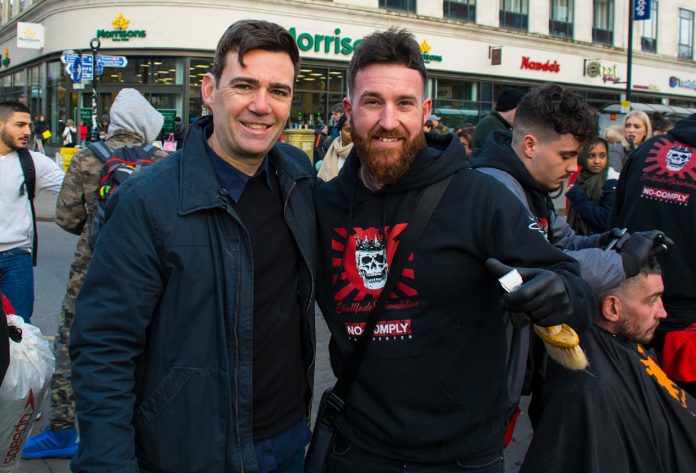 Soldier-turned barber Ged King wants to push his unique homeless haircutting offer “to the next level” after notching up his 1,200th free of charge trim alongside Greater Manchester Mayor Andy Burnham.

The 32-year-old launched Skullfades Barbers in Sale in 2014 and soon became known amongst homeless people of Manchester for his commitment to providing them with homemade lunch packs and free haircuts. Ged also started the Skullfades Foundation last year.

The Mayor Andy Burnham stood alongside Ged as he brought up 1,200 free haircuts for the homeless in the city centre this month?

Andy, who has pledged to end rough sleeping in the city by 2020 and also launched the Greater Manchester Mayor’s Homelessness Fund, said: “It was both humbling and inspiring in equal measure to spend time with the team brought together by the Skullfades Foundation in Piccadilly Gardens.

“It is one thing to give money to support people who have no home; it is quite another to give up your weekend to help them and provide personal care and attention to them.”

He added: “Watching the change in the people receiving help was truly life affirming. It was a whole community effort by people from all walks of life – from barbers to musicians to chefs. I left feeling uplifted, in awe of the generosity of the people of Greater Manchester and in no doubt, that, together, we will end rough sleeping here.”

Ged believes more barbers can join his campaign to help rough sleepers and potentially change their lives for the better.

Ged, who joined the Army aged 16 and has seen many ex-servicemen become homeless, said: “I care about people and believe life is more about what you can give that what you can get. Once I established my business, I thought, ‘what next?’.

“I can’t describe how heart-warming it is to see the difference a positive chat, food packages and a haircut can make. Anyone can become homeless, it really is true.

“People who have come out with us on the streets, including Greater Manchester Mayor Andy Burnham, learn this quite soon and are stunned by the reactions we get.

“To be nearly two years in and to have helped so many people is amazing. I now want to push on to the next level and am urging more people and businesses to help where possible.”

The Skullfades Foundation raised over £8,000 earlier this year through crowdfunding and accepts donations all year round. Sleeping bags and rucksack donations can be dropped at Skullfades Barbershop in Sale.