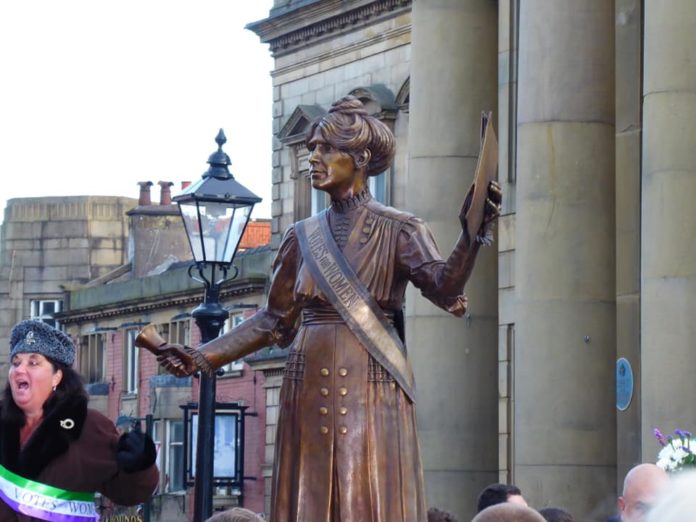 The event was opened by Jim McMahon and actor Maxine Peake addressed the crowd. Debbie Abrahams MP, the artist Stan Chow and author Carol Talbot were in attendance, along with relatives of Annie Kenney and local residents, trade unions, schools and volunteers.

Oldham enjoyed performances from Amy Gavin, Oldham Theatre Workshop and other local women at Gallery Oldham, which included personal stories. There was also a women’s choir which was a perfect start to the day before hundreds gathered to march behind Oldham Youth Brass Band to the Old Town Hall.

It was a busy day for the volunteers who had worked so hard to make this a reality. As the statue arrived the previous day it was all hands to the deck to prepare for the opening.
The day got off to an early start and Oldham Council and Gallery Oldham were very supportive in making sure everything went smoothly.

The statue was funded entirely by donations, kickstarted by the GMB trade union and made up with amazing events from schools, community groups, trade unions and political branches, and local businesses. Fundraising events were held including four dinners, a suffragette tour in London, a sponsored run, a theatre production, film screening, non-uniform days, raffles, cake sales, private donations – and much more.

Artist Stan Chow also supported the campaign by designing a striking image of Annie which were sold as limited edition prints.

Young people had been central to the project because as much as the statue is important, it is Annie’s story reaching a new generation which has been the most inspiring part of the project. Fitting then that it was the children from St Thomas School who held a production and march to raise funds, who unveiled the statue.

They were joined by many other schools, local colleges, scout groups and others, all of whom had helped to raise funds over the last two years.

So many schools, groups, businesses and more did so much that if I even try to list them now I’ll almost certainly miss someone who needs a mention; but we are preparing a booklet to commemorate the project which will mention and thank all groups and organisations who made it possible so watch this space early next year!

We also remember the late Cllr Susan Dearden who served on the Project group and although she passed away before the statue was completed I am sure she was with us yesterday, sharing the energy, complete with sash, and shouting at the top of her voice.

“Thanks to all of you who made it possible; to all on the fundraising committee and to those who held events, turned up and took part. It would not have been possible without you. Be proud.Annie shows us that with belief and determination we can achieve extraordinary things. She is a working class inspiration.Choose unity and courage over division and cowardice.”