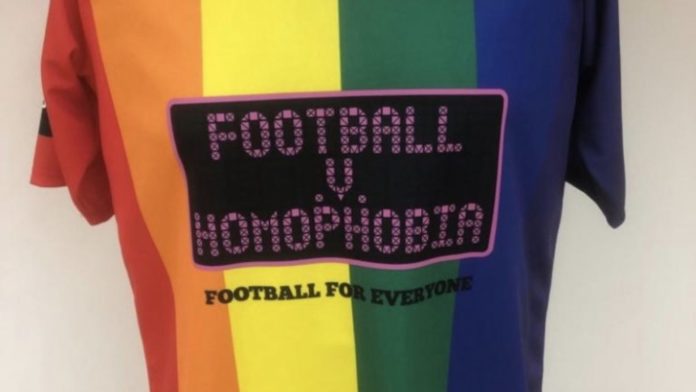 Altrincham are launching a trailblazing initiative in support of football’s fight against homophobia by becoming the first team to take to the field for a competitive game in a kit based on the LGBT Pride Flag.

In a one-off move that reflects the club’s unswerving commitment to inclusivity, the Robins’ celebrated red and white stripes, famed for so many FA Cup giantkilling acts down the years, will give way to a multi-coloured design based on the LGBT Pride Flag.

The eye-catching strip will be worn for the Vanarama National League North fixture with Bradford (Park Avenue) at The J.Davidson Stadium, Moss Lane, on Saturday, February 16th, and it is understood it will give Alty the distinction of being the only club so far to demonstrate their support for the Football v Homophobia campaign in such a public and unequivocal way.

Explaining the club’s pioneering stance, director Bill Waterson said: ‘We are extremely proud to be able to confirm that all the arrangements are in place for us to celebrate Football v Homophobia month in February by wearing this special kit against Bradford.

‘We believe it will be the first time anywhere in the world that a senior football club has worn a kit solely modelled on the LGBT Pride Flag, and Altrincham will, therefore, be creating a small moment of football history.

‘To us, it is a big statement. Altrincham Football Club are committed to creating a welcoming environment for all who attend our games,  and our support for Football v Homophobia is part of this commitment.

‘We would like to thank our main shirt sponsors, J.Davidson & Sons, for allowing their place on the front of the shirt to be replaced by the Football v Homophobia logo, and the FA, the Vanarama National League and our opponents Bradford (Park Avenue) for their support of this initiative.

‘The shirts worn by our players during the game will be sold by auction after the match, and replica kits will be available for sale at the game and via our website, www.altrinchamfc.com.’

Profits from the auction will go to Pride Trust, a LGBT+ youth charity who are rebuilding the LGBT centre in Manchester.