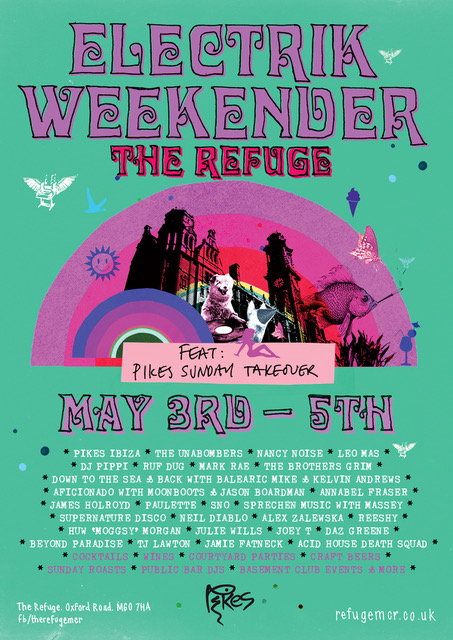 The Refuge weekenders are the epitome of all-day and all-night long gatherings that are not to be missed. During Early May Bank Holiday weekend from Friday 3rd to Sunday 5th May, The Refuge presents ‘All Under One Roof’ featuring friends and family of The Electrik Chair on Saturday, and the return of a Pikes Ibiza takeover on the Sunday, bringing Balearic beats to Manchester’s skyline.

To set off the proceedings on Friday 3rd May, The Public Bar will see Tim Lawton and Joey T spinning records to the early hours – ideal for those wanting to get the party started straight after work with a gin and tonic at the ready.

Moving on to Saturday 4th May, The Refuge Courtyard will have its grand re-opening with a spectacular Friends of Electrik line-up from 12pm. Providing the ultimate sonics for a memorable al fresco party, with The Unabombers, Kelvin Andrews, Darren Greene, Balearic Mike, SNO, and Alex Zalewska.

Then, if you’re feeling brave enough, head into The Basement for a lights-low underground party with the ultimate party starters, Supernature Disco and Chris Massey, with their guaranteed dance floor filling sounds of house, disco and much more. This will be from 10pm and it will be free entry.

To conclude the second Bank Holiday of the year, for the third year running, The Refuge will be welcoming back the iconic Ibiza institution, Pikes, to Manchester bringing Ibizan culture as Pikes host a memorable Balearic Sunday.

Bringing sounds of the White Isle to Oxford Road, the Pikes takeover has become an integral part of The Refuge’s Bank Holiday programme, providing the perfect soundtrack and Ibizan vibes to monumentally finish the weekend.

An epic line-up of DJs has been carefully selected for the Sunday across The Courtyard, The Public Bar and The Basement – including A Balearic Brunch with The Brothers Grim & Friends, Nancy Noise, Leo Mas, DJ Pippi, Mark Rae, Ruf Dug, Annabelle Fraser and many more who have a long and rich history with the island.

Closing off the festivities in the basement will be two of the finest musical collectives – Aficionado and Down to The Sea & Back will go head to head for six hours of hedonistic Balearic tracks.

Bank Holiday Weekends at The Refuge are a cultural celebration and a collaboration of partnerships, aiming to be the ultimate destination for those who do not leave the city during bank holidays. Make sure you do not miss out on this spectacular programme – some key events are ticketed so booking in advance is advised to avoid disappointment.

The Refuge is located on Oxford Street, Manchester M60 7HA next to The Principal Manchester Hotel and all the finer details can be found on their website: www.refugemcr.co.uk/blog/

Aperitivo at Mamuicum – New Cocktail Hour in the City

Dreamgirls is coming to the Palace Theatre in 2022