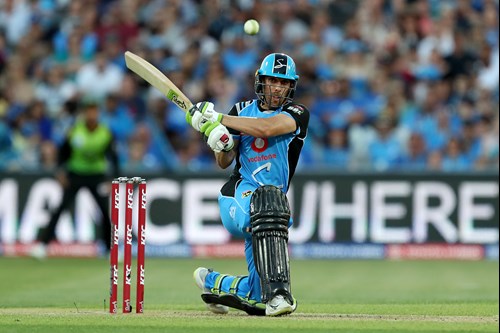 Maxwell will play in Lancashire’s next game against Durham in the Royal London One-Day Cup on Tuesday before flying back to Australia.

Lehmann, son of former Australia player and Head Coach Darren, played First-Class cricket for Yorkshire in 2016, scoring 384 runs at an average of 54.85. He will be available for the knockout stages if Lancashire qualify from the North Group in the Royal London One-Day Cup.

The left-handed batsman averages 31.09 in List A cricket and has played in the Big Bash for Adelaide Strikers since 2015.

Lancashire’s Director of Cricket Paul Allott, said: “We are very fortunate that we’ve been able to find a replacement for Glenn as he leaves us to meet up with the Australia World Cup squad.

“Getting a player of quality for a short spell, with little notice can be difficult, but we’re really pleased that we have been able to secure the services of Jake for the rest of the competition.

“Everyone at Lancashire Cricket wishes Glenn all the best for the World Cup and we look forward to welcoming him back to Emirates Old Trafford later this summer for our Vitality Blast campaign and remaining Specsavers County Championship fixtures in September.”

Jake Lehmann added: “I am hugely excited to have been given the opportunity to join a massive Club like Lancashire.

“I thoroughly enjoyed my previous spell in England with Yorkshire a couple of years ago and I’m really looking forward to pulling on the Red Rose and playing at Emirates Old Trafford this time around.

“I am looking forward to meeting all of the lads and I hope that I can put in some match winning performances to help the team finish strongly in the Royal London One-Day Cup.”