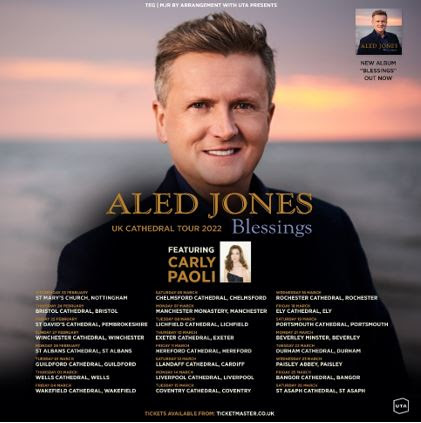 Aled Jones one of the classical world’s vocal powerhouses, has announced a very special tour for February and March 2022, as he brings his unique concert of music and stories to cathedrals and churches around the UK.

Beginning at St Mary’s Church in Nottingham on 23rd February, the tour will take in some of the most stunning holy buildings in the UK, including Bristol Cathedral, Manchester Monestary, Liverpool Anglican Cathedral, Coventry Cathedral and Durham Cathedral, before ending at St Asaph Cathedral on 26th March.

The tour will see Aled perform tracks from his album Blessings, which features songs from a range of different faiths – Quaker, Christian, Catholic, Muslim and Buddhism – including uplifting hymns, texts and scriptures set to music. Having reached the top of the Official UK Classical Chart upon its release in 2020, it also reached the top 15 in the Official UK Album Chart, and features best loved classics including How Can I Keep From Singing?, Sunrise Sunset, Ave Maria and Bless This House.

40 years have passed since Aled was a choir boy at Bangor Cathedral, having gone onto receive countless prestigious awards, record-breaking sales and chart successes. He is the original classical crossover star, having performed for the Pope and the Royal Family, received an MBE and racked up over 10 million album sales throughout his extraordinary career.

After beginning his career at the age of 12, Aled became one of the world’s most successful boy sopranos, releasing 12 hit albums in 4 years, with the defining moment being Walking In The Air, the hit song from the family-favourite film The Snowman. He has since released over 40 albums, and has over 40 silver, gold and platinum discs.

Aled has also forged an extensive career as a TV & Radio presenter. As well as having his own show on BBC Radio Wales, he hosts the most listened to show on Sunday on Classic FM, and has been a firm favourite presenting Songs Of Praise on BBC 1 for almost 20 years.

Aled will be joined on tour by the classically trained Brit Nominee soprano Carly Paoli. Born in the UK but with strong Italian roots, Carly has duetted with José Carreras for HRH The Prince of Wales at Windsor Castle and with Andrea Bocelli, subsequently shown on PBS television. Her new album, Carly Paoli & Friends released September 2021 is an eclectic selection of duets ranging across the musical genres. Featuring artists such as Joseph Calleja, Elaine Paige and Tony Hadley, in one of the stand-out spiritual numbers she is joined by Aled himself in a new version of the beautiful Irish hymn, Be Thou My Vision.