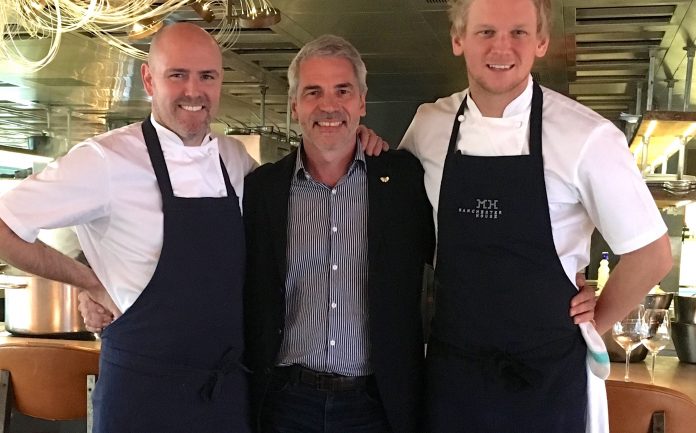 Commenting on the move Byrne said; “I feel the time is right for Nat to get the recognition he deserves at Manchester House. He has been running the show for a long time since I widened my role within Living Ventures and been by my side since the day we opened, so is more than ready to put his own mark on the menu. I can’t wait to see what he comes up with! I’ve had a great time at Manchester House and am very proud of what we’ve achieved. I know that the business is in safe hands”

Jeremy Roberts CEO of Living Ventures commented. “We’re sorry to see Aiden leaving us and I want to take this opportunity to thank him publicly for his enormous contribution in establishing Manchester House on the culinary landscape of the city. We wish him every success for the future. Living Ventures have a history of developing young talented people within the company and we’re excited to see Nat achieve his potential.”

The menu at 20 Stories will be modern British, celebrating local produce with suppliers sourced, where possible, from no more than 50 miles from the city.  Alongside the restaurant, a more casual brasserie will serve dishes mainly from the grill while the bar will boast a unique list of modern cocktails and craft beers.

An alluring roof top garden will feature trees scaling two stories high and will host an outdoor lounge bar under a canopy of trees and dramatic lighting.  Outside BBQs and al fresco fireplaces are dotted along the terrace to create a cosy atmosphere against the backdrop of Manchester’s skyline.

The name, 20 Stories, not only pays homage to the restaurant’s skyscraper location overlooking the city, but also to the original use of the building.  Northcliffe House was once renowned as a hub for the printed word and as Manchester’s centre of news, housing a variety of printed press publications such as Manchester Evening News, The Guardian and The Daily Mail.

Chairman and CEO of D&D London, Des Gunewardena, has commented, “Manchester is a fantastic city and we have watched closely over the last few years the resurgence of the restaurant scene in the city generally and in Spinningfields, in particular. Working with Mike Ingall’s Allied London as landlord and now with Aiden Byrne, a chef who we’ve long admired, is a very exciting prospect for us. 20 Stories is a project that we at D&D, have looked forward to launching with huge anticipation and in Aiden, we couldn’t have asked for a better chef to partner with “.