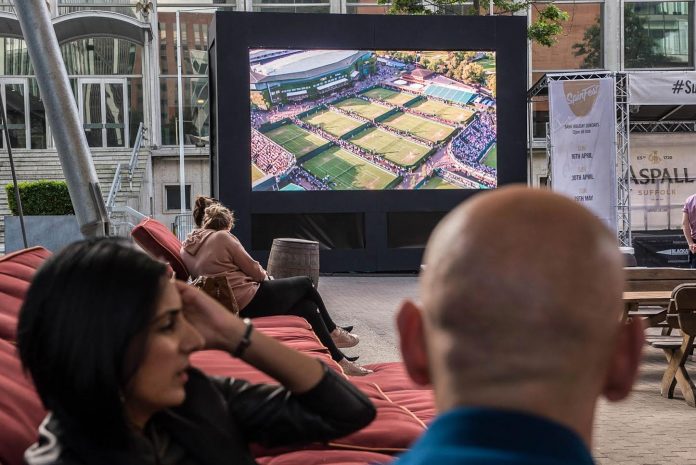 Spinningfields has launched its ten-week long programme of Summer Screenings at The Oast House today.

Spinningfields Summer Screenings will starting with a fortnight of uninterrupted Wimbledon coverage, cult classic film nights will be on every Tuesday from July 18th onwards and other seasonal highlights such as the World Athletics Championships will also be screened.

This is a non-ticketed event designed to provide some light relief during the working week and somewhere to relax outdoors at the weekend.

The screenings begin a fortnight of uninterrupted Wimbledon coverage, so tennis fans can relax on the legendary Oast House courtyard from first serve up until close of play.

Beginning on 18 th July, Tuesday nights are dedicated to screenings of cult classics like Stand By Me and Dirty Dancing, and new releases like Beauty and the Beast.

Viewers won’t miss a minute of the action, with the Oast House food and drinks menu available to order via the QKR smartphone app and served directly to your seat.The Oast House also boasts an impressive list of ales, including lager, pale ale, IPA, wheat beers and ciders, as well as a list of white, red, rose and sparkling wines. On the food front, expect their signature hanging kebabs, burgers from the grill, deli boards and fabulous fondue.

The viewing area can host up to 350 attendees and with an exciting schedule of events, the

Spinningfields Summer Screenings promise to be 10 weeks to remember.

The full schedule is available at spinningfieldsonline.com/summerscreenings.