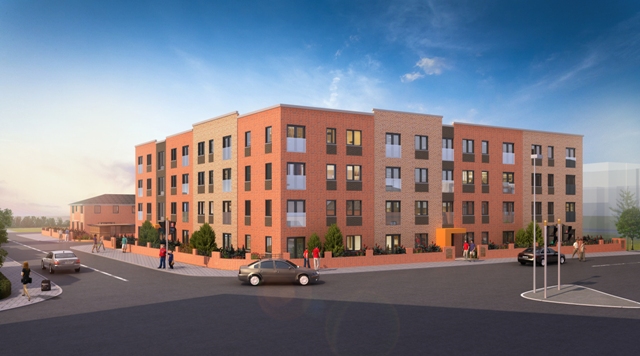 Fifty eight affordable homes are to be built on the former site of a Catholic church in Salford.

All Souls RC church, on the corner of Liverpool Street and Weaste Lane, closed in 2010 and was demolished in 2011.

The 0.4 hectare site land has remained undeveloped ever since but Salford City Council has just granted planning permission for developer, Investar Developments and placemaker Places for People to build 58 affordable homes.

These will include a four storey block of 48 one and two bedroom apartments, nine two-storey houses which will range from three to four bedrooms and one two bedroom bungalow. At first let all 58 homes will be allocated via the council’s choice based lettings system to residents who are in housing need.

All homes will be for affordable rent and will be capped at the Local Housing Allowance starting from just under £300 a month. The site will also offer disabled parking, an electric vehicle charging point and a mobility scooter store.

“This development will provide a good range of different sized homes for local people and opens a new chapter in the history of All Souls.”

Paul McEvoy, Group Head of Affordable Housing at Places for People, said: “Melody Gardens has been a collaborative effort, and we are pleased to reach this stage of planning as we move one step closer to realising our vision of more affordable homes for local people. Our aim is to be on site by summer 2018.”

All Souls church was founded in the 1890s but closed its doors with a final Mass on November 2 2010 just months after football legends Sir Bobby Charlton, Denis Law and Nobby Stiles went to the church for the funeral of Busby Babe Albert Scanlon.

The church, which needed extensive repairs, was demolished in 2011 but the marble altar and lectern were relocated to St James, Pendleton. The two parishes were combined, due to falling congregations.