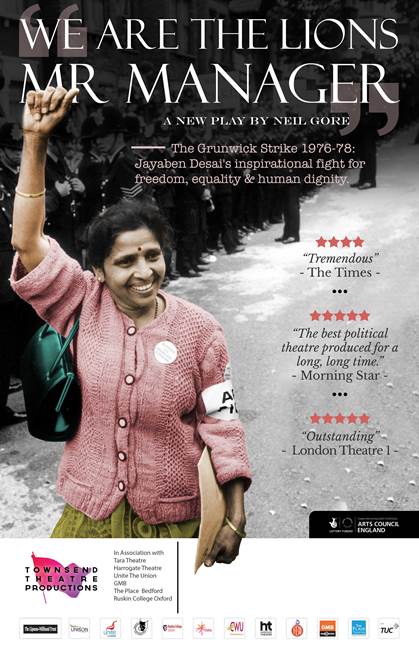 The The Working Class Movement Library in Salford is to host two performances of a new play by Townsend Productions which relives the extraordinary true story of the Grunwick Strike, a dispute that challenged the way women and immigrants are treated in the workplace.

We are the lions, Mr Manager! by Neil Gore will be performed here on Friday 20 and Saturday 21 October at 7.30pm. The Friday performance is already sold out – tickets for Saturday are available here, price £12.50 (£10.50 concessions).

In August 1976 a group of workers in a film processing factory in Willesden walked out in protest at their unfair working conditions, low pay and the ‘bullying tactics’ used by management.

Led by mostly East African Asian women, the Grunwick strike became one of the longest and most important industrial disputes in British history, and changed the way trade unions thought about race and new immigrant communities coming to Britain in the 1970s.

The women’s fight was supported by thousands of trade unionists and campaigners, as more than 20,000 people joined them on the picket lines.

But the story of the Grunwick dispute is not just a story about ground-breaking solidarity. It is also the story of a remarkable woman, Jayaben Desai.

She defiantly led the first walk-out in protest against the humiliation she and other women employees felt at the Grunwick factory. As she left, the manager shouted at the women to “stop chattering like monkeys in a zoo”, and Jayaben replied: “What you are running here is not a factory, it is a zoo. But in a zoo there are many types of animals. Some are monkeys who dance on your finger-tips, others are lions who can bite your head off. We are the lions, Mr. Manager!”

Jayaben became the leader of the Grunwick Strike and not only stood up for workers’ rights but, with her steadfast resolve, turned the dispute into a national movement for human rights, inspiring future generations and challenging the way people perceived Asian women.

Now, Jayaben’s story is being brought to life by Townsend Theatre Productions. Written by Neil Gore, the play will tell the story of the Grunwick dispute through a mixture of stirring song, poetry, movement and dance, and will utilise Townsend Production’s trademark cast of two characters playing multiple roles.

Neil Gore says: “In our work we aim to focus on the lives and contributions of inspirational and vital figures from our social history, often forgotten, who campaigned vigorously to improve the quality of life for everyone. Jayaben Desai is one such figure. Her resolve and courage should be remembered and celebrated”.

Manchester Art Fair – Where Can You Bag Yourself a Banksy, in Manchester, This...

Deities at the Bottom of the Garden