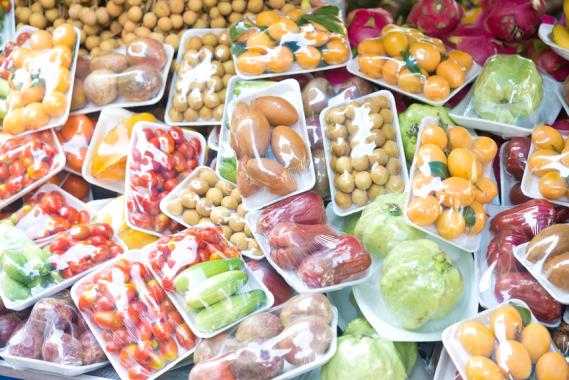 Which? is calling on the Government to make clear and simple recycling labelling compulsory after it found up to 29 per cent of plastic packaging used by supermarkets is either non-recyclable or difficult to recycle.

In a snapshot investigation, the consumer champion analysed the packaging on a shopping basket of 27 everyday own-brand items at 10 major supermarkets and found that Lidl had the lowest proportion of widely recyclable packaging (71 per cent).

Which? researchers attributed Lidl’s poor performance in part to the use of hard-to-recycle plastics for some foods, when rivals like top performer Morrisons (81 per cent) had found greener alternatives.

Some groceries had non-recyclable packaging no matter which supermarket they came from. All the packaged easy-peel oranges, for example, came in nets with plastic labels.

The Which? investigation found that between four per cent (Iceland) and 10 per cent (Waitrose) of the packaging analysed could only be recycled at supermarket collection points or “bring banks” rather than at the kerbside.

But this wasn’t always made clear on the labelling. And a separate survey showed that fewer than one in ten shoppers (9%) always or often take packaging back to a supermarket to be recycled.

Which? researchers were surprised to find huge inconsistencies, with different systems of labelling used and some items not labelled at all. Our expert also believed some products – for example, M&S and Waitrose apples – were labelled as non-recyclable but the type of plastic they’re made of is recyclable at supermarket bring banks.

Still more had labels that were only visible once the food was unwrapped – not helpful to those trying to make a considered choice in the supermarket aisle.

That’s why Which? is calling on the Government and manufacturers to simplify current recycling labels and make recycling labelling compulsory on all plastic packaging, so shoppers know what can and can’t be recycled, and how.

Along with simpler labelling, Which? is calling on manufacturers to stop using non-recyclable packaging where recyclable options exist.

Nikki Stopford, Director of Research and Publishing at Which?, said:

“Which? believes a lot more can be done to increase the amount of recyclable packaging and the way it is labelled so that consumers know what can be recycled and how to recycle it.

“The plastic pollution crisis makes it more crucial than ever that the Government, manufacturers and supermarkets do the best they can to banish plastic that cannot be recycled and promote the use of less damaging packaging.”