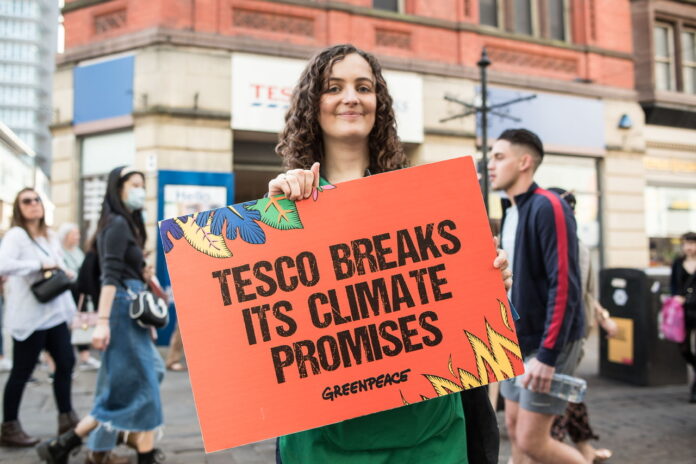 Greenpeace volunteers visited Tesco Express on Market Street in Manchester at the weekend and held a demonstration calling on Tesco to drop climate criminal meat producers from its supply chain. This was one of around 50 demonstrations happening across the UK in March.

They held up placards with shocking photos of the Amazon rainforest being destroyed due to deliberate fires, and signs reading ‘Tesco meat fuels Amazon destruction’, ‘Tesco breaks its climate promises’ and ‘Tesco buys meat from climate criminals’. Passersby, on Market Street and later the Northern Quarter, signed the petition, which totals more than 263,000 signatures. The petition and the message call on Tesco to drop forest destroying companies from its supply chain, and replace at least half of the meat it sells with affordable plant based alternatives by 2025.

Meg Long, Manchester Greenpeace volunteer said ‘Tesco is buying meat from one of the world’s worst climate criminals which makes its claims to be serious about tackling the climate crisis seem very hypocritical. I joined other local people outside Tesco in Manchester to show the supermarket that it is crossing a line by continuing to source industrial meat from rainforest destroyer JBS.’

As of early March, customers have brought the message that ‘Tesco meat fuels Amazon destruction’, to more than 1000 of Tesco’s almost 3000 stores, with many more visits planned in the coming weeks. The pressure on Tesco is escalating, as new data from Brazil shows that deforestation in January was 5 times higher than in 2021 .

Tesco’s ‘Net Zero’ pledge , announced ahead of last autumn’s UN climate summit, doesn’t acknowledge the need to act now to radically reduce emissions or mention any plan to reduce industrial meat and dairy that is helping drive the climate crisis. Furthermore, despite Tesco claiming to have met its deforestation targets, its meat is not deforestation-free. It buys British chicken and pork from suppliers owned by notorious rainforest-destroyer, JBS. JBS recently admitted it would accept deforestation in its supply chain for another 14 years.

And Tesco continues to sell more soya-fed, factory-farmed meat than any other UK supermarket. Soya continues to drive deforestation in critical ecosystems like the Brazilian Cerrado and is largely used as animal feed for industrial meat. Tesco has already failed to keep its promise of zero-deforestation by 2020 and its plans to buy soya ‘only from deforestation-free areas’ by 2025 are meaningless given the complete collapse in 2019 of talks involving traders like Cargill to agree protection for whole areas from soya .

‘Tesco tried to greenwash its way out of its deforestation problem at the recent climate talks in Glasgow. But Tesco is still funding one of the worst forest destroyers in the Amazon and fuelling deforestation in other critical ecosystems across South America. Greenpeace Manchester will keep letting shoppers know that Tesco meat fuels deforestation until it takes proper action to remove deforestation from its supply chain and drops JBS. The Amazon plays a critical role for the world’s climate – because it stores so much carbon. If we lose the Amazon, we lose the fight on climate change.’

6,515 Local Green Spaces have been designated in the decade since their introduction.