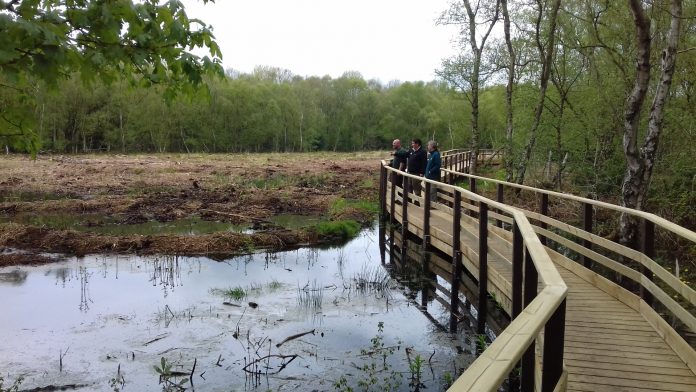 The first major restoration project of the Carbon Landscape – a £3.2 million programme to restore former industrial landscapes in the North West – has been officially opened near Warrington.

The new boardwalk at Risley Moss will allow the public to get up close to nature, and to see how a peat bog is coming back to life with the restoration efforts made possible by Heritage Lottery funding and hundreds of volunteers.

This is the first of 8 major restoration projects in the Carbon Landscape, which over five years will restore more than 130 hectares to nature. The project, which will offer access to amazing natural sites and rare habitats on the doorsteps of our towns and cities, has been designed with the help of Dr Joanne Tippett from The University of Manchester’s School of Environment, Education and Development.

Wildlife is being squeezed out and isolated, and there is a real risk of losing species locally if safe and effective corridor are not created for them to travel through. By creating a network of safe spaces, and inspiring local people to experience these areas in new ways, the Carbon Landscape will create a better future for wildlife as well as benefiting the local communities living alongside them.

“This is the landscape that fuelled the Industrial Revolution,” said Dr Tippett. “It is appropriate that through telling the story of this landscape and uncovering its hidden beauty, we are starting to think differently about the future.”

Dr. Anna Hetterley, the Programme Manager of the Carbon Landscape says: “People have been digging-up the lowland peat bogs for fuel in Salford and Warrington for thousands of years. When large areas of peat between these major cities in the North West dry out, they become fire hazards. This project is restoring these rare habitats, allowing them to soak up and store rainwater. Re-wetting the bogs reduces the risks of fires, such as those that are currently ravaging Saddleworth Moors. The restoration work enabled by the Carbon Landscape has the extra benefit of helping to reduce flooding in times of extreme rain.”

Warrington Borough Council’s executive board member for leisure and community, Cllr Tony Higgins, says: “The mini Moss and boardwalk that has been created though the Carbon Landscape showcases the vital role nature can play in improving our lives, with vastly improved access and educational value. I am looking forward to taking hundreds of school children out onto the moss, and watching them learn about this amazing, rare habitat that is right on their doorstep, which up until now has been hard to access and see”.

Co-op tests the water as it launches recyclable water bottles

Sea Life Manchester invites visitors to see the shocking effect of plastic on our...