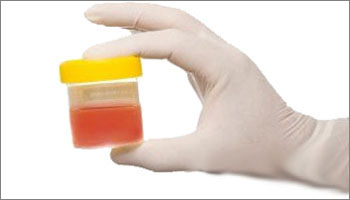 Blood in pee is a key symptom of bladder and kidney cancer, yet only 15% of those most at risk in the North West – aged 50 or over – check the colour of their pee every time they go to the toilet.

‘Be Clear on Cancer’ campaign launches in the North West to encourage people to ‘look before they flush’ and tell their doctor if they notice blood in their pee, even if it’s just once
Every year around 19,100 new cases of bladder and kidney cancer are diagnosed in England; causing around 8,000 deaths.

A new film featuring Dr Dawn Harper highlights what blood in pee might look like
A new survey shows that just 15% of North West adults aged 50 and over check their pee when they go to the toilet, meaning they might not notice blood – a key symptom of bladder and kidney cancer.

Public Health England’s (PHE) new ‘Be Clear on Cancer’ campaign encourages everyone to ‘look before they flush’ and visit their GP without delay if they notice blood in their pee, even if it’s just once.

A new short film featuring TV doctor, Dr Dawn Harper, is being released as part of the campaign. The film shows what to look out for as the colour of blood in your pee can vary – from very diluted, to bright red or even dark brown, like the colour of weak black tea. Blood in pee is a symptom in almost two thirds (64%) of all bladder cancers and around a fifth (18%) of kidney cancers.

Blood might not appear every time, so it is important that people seek medical help even if they notice it just once. Worryingly, nearly half (around 46%) of those surveyed in the North West said they would not seek medical advice if they saw blood in their pee just once, and 2 out of 5 (43%) of those surveyed said they would wait and see if it happened again, potentially putting off a vital diagnosis.

When asked why they would not go to the GP straight away if they noticed blood in their pee, some concerning delays for seeking help were uncovered; 1 in 5 adults (19%) in the North West say they would be worried about wasting the GP’s time and a similar number (19%) would only book an appointment sooner if they had other symptoms.

Latest figures show that every year in the North West, around 1,777 people are diagnosed with bladder or kidney cancer and sadly, around 723 people die from these diseases.

Early diagnosis is critical; 4 out of 5 adults (84%) diagnosed with kidney cancer and three quarters (77%) of those diagnosed with bladder cancer at the earliest stage (stage 1) will live for at least five years. At a late stage (stage 4), this drops to around only 1 in 10 people (10% and 9% respectively).

Dr Rebecca Wagstaff, Deputy Director Health and Wellbeing at Public Health England North West, said: “The earlier people are diagnosed, the better their chances, which is why it’s vital people understand what to look out for and when to visit the GP.

“This campaign has the important aim of helping raise awareness of the signs and symptoms of bladder and kidney cancer and encouraging people to visit their GP after seeing blood in their pee.”

Prototyped in Manchester, nationwide launch of resources intended to protect schoolchildren from Sepsis