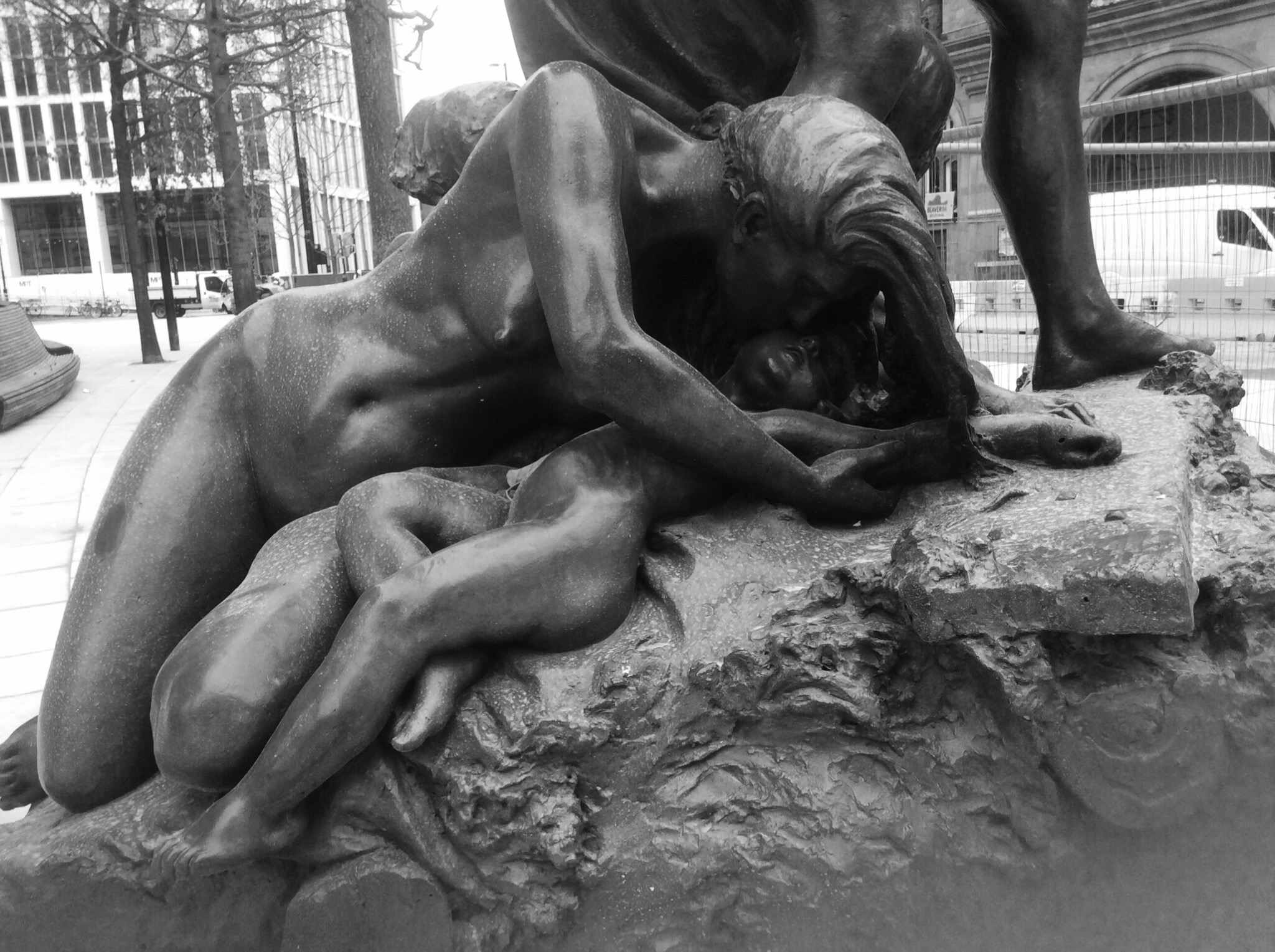 Those of you who are pleased that the area around Manchester’s Central Library is opening up now after more than three years of work may have noticed the arrival of a “new statute. John Cassidy’s Adrift now has pride of place opposite the Midland Hotel

Bronze sculpture of a family clinging to a raft in a stormy sea. The central figure is a half-naked man, holding a sheet aloft in his raised right hand, calling for help. Arranged around him are the figures of his wife and three children. His wife is shown leaning over and kissing their infant son. To the left, is the daughter, her raised arm held in her father’s left hand. At the rear is the prone figure of a youth, the elder son, holding his breast. Parts of the raft are visible in the waves which make up the base.

The words of the Public Monument and Sculpture associations transcript project do far more for the statue that mine will ever do.

Now that John Cassidy’s 1907 work has reappeared for a second time after spending the last three years in storage, it is a good time to reflect on its history.

It was first exhibited in 1907 at the New Gallery in London. Its creator , born in County Meath in 1860, son of a farmer, joined many of his compatriots in the late 19th century settling in Manchester where he enrolled in the City’s School of Art, setting up studios in Barton Arcade and later in Chorlton on Medlock from where his greatest works would be conceived.

After exhibiting at the 1887 Royal Jubilee exhibition in Trafford, he would spend the rest of his career producing commissioned art work. Among his patrons would be Enriqueta Rylands, and John Gresham, who would purchase Adrift after its display in London before bequeathing it to Manchester’s Corporation.

Among his other works are the Albert Square Jubilee fountain, the marble statue of John Rylands and his wife in the Ryland’s Library and bronze stature of Edward VII in Whitworth Park.

Adrift was originally to be displayed in the new art gallery that was supposed to be built in Piccadilly Gardens on the site of the now demolished Infirmary.It was of course never built but instead it would be the Notre point of the sunken garden which adorned the gardens between the wars.

In 1953 to celebrate the coronation of a new Queen, the statue was removed to be replaced by a fountain, moved to the back of the gardens were it would remain until Manchester decided to redesign the area in the style of a Japanese artist and the statute disappeared into storage.

It reappeared in 2009 between the Central Library and the St Peter’s Square tram stop only to vanish two years later when redevelopment work began.

Now it has returned to its rightful place at the heart of Manchester.

As for John Cassidy, like many artists, his skills were utilized in the design of the many war memorials that were commissioned around the country.He would live until 1939 and is buried in the Southern Cemetery