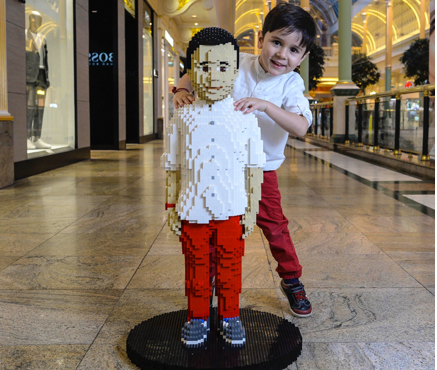 A five-year-old boy from Cheadle in Manchester has won one of the most unusual competition prizes with a lifesize replica of himself, made from 7,400 pieces of LEGO!

The 3-foot twin figure of Sunay Urs follows an initiative by intu, owner of some of the best shopping destinations in the UK, to fulfil the most impossible gift requests in an effort to make customers smile. It took two professional LEGO builder eight weeks to make and was presented to the youngster at intu Trafford Centre after his mum, Dilek, entered him into the competition.

The miniature LEGO superfan spends two hours before and after school practicing his craft by building everything from his LEGO Coast Guard Headquarters and now, himself! He claims to have watched the LEGO Movie over ten times and celebrated his last birthday at LEGOLAND in intu Trafford Centre.

The five-year-old hopes to one day become an official Master Builder, joining the world’s elite builders that have to be certified by LEGO around the globe.

Dilek Urs, Sunay’s mum, comments: “Sunay loves playing with his LEGO & creating endless new things from his imagination. He couldn’t believe it when I told him we’d won a competition for him to be turned into an actual LEGO character. He is thrilled with the finished item and now we need to decide where it’s going to live in our home!”