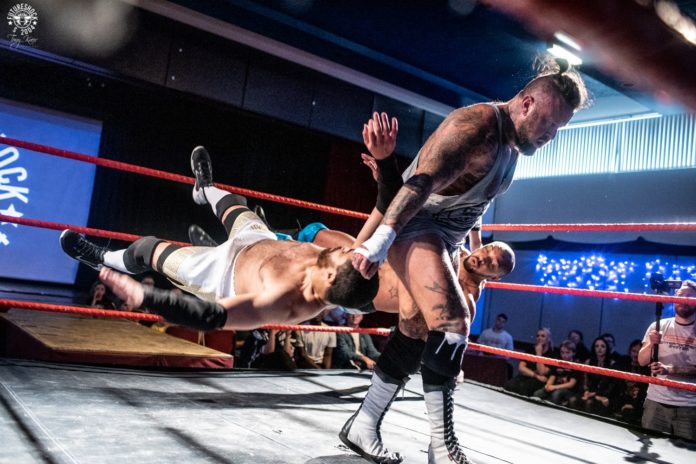 FutureShock Wrestling and GRUB Manchester have joined forces to bring you what can only be described as the perfect Sunday’s entertainment. Fairfield Social Club, but a stone’s throw from Picadilly Station is the city’s coolest new entertainment spot.

Offering a friendly, relaxed vibe and a wide range of fantastic drinks as well as incredible draft ales it’s rapidly gaining a reputation as the place to be of a weekend. Throw in the very best of British pro wrestling and mouth watering street food and it’s something you won’t want to miss.

On August 4th FutureShock returns to Fairfield Social Club for yet another epic card of hard hitting, heart stopping, high flying action for fans of all ages. In the main event it’s an all champions dream match as FutureShock Tag Team Champions Zack Gibson and James Drake clash with the FutureShock Heavyweight Champion John McGregor and the FutureShock Adrenaline Champion Joey Hayes. As of press time these are the reigning champions but if that changes then whomever holds the titles will be competing in this match. All four men’s pride will be on the line as a loss here will surely hurt their momentum going into their next defence.

In action from the FutureShock Women’s division the ever popular Hollie will square off with the ferocious Lizzy Styles, Danny Hope and Chris Egan will face Alex Boylin and Rizman Khan to determine the top contenders for the FutureShock Tag Team Championships and so much more.

Easily reached by foot from Picadilly Station, Fairfield Social Club is incredibly convenient to travel to by train, Metrolink or bus. FutureShock is committed to providing family friendly action that’s suitable for fans of all ages.