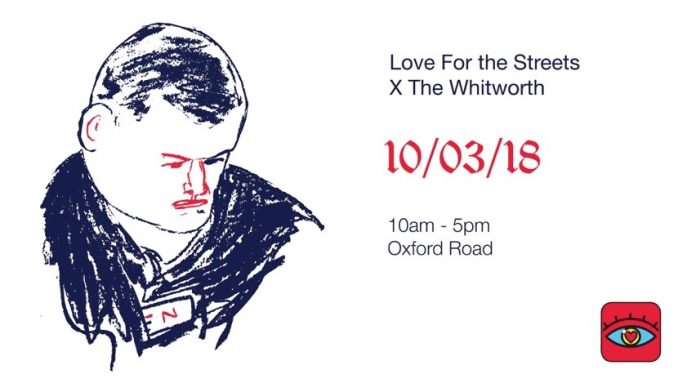 A collection of artworks created by homeless people in partnership with students from Manchester School of Art is to be exhibited at The Whitworth art gallery.

Participants from Greater Together Manchester’s night shelters and homelessness charity Cornerstone have worked with the students to produce a range of work including portraiture, weaving, tile-making and street art.

The exhibition is part of the Love for the Streets campaign for Manchester Homeless Awareness Week (March 10-17), led by students and young social entrepreneurs from across Manchester to create more awareness of homelessness.

The campaign supports the Big Change (MCR) Fund and aims to encourage more students to volunteer with charities that support the homeless.

Participants joined students in workshops over six weeks to produce the work for the event on Saturday March 10 at The Whitworth.

Mike, one of the participants, said: “The workshops were great. They helped to bring people together and gave people a chance to do something that they might not have done before.”

Students and homeless participants will be at The Whitworth to talk about the project and the work they have produced.

A large display of visual art, interactive workshops, live music and films showcasing the work of the homeless charities will also be on show.

Ella Marshall, Project Coordinator from Manchester School of Art at Manchester Metropolitan University, said: “One of the most important parts of the workshops for me is the conversation between the homeless community and youth culture in Manchester.

“Art is the perfect medium to create these bonds, and to give the people involved a voice.”

The exhibition will also feature work by David Tovey, a formerly homeless artist and activist, who has had work featured at the Tate Modern and founded the first One Festival of Homeless Arts.