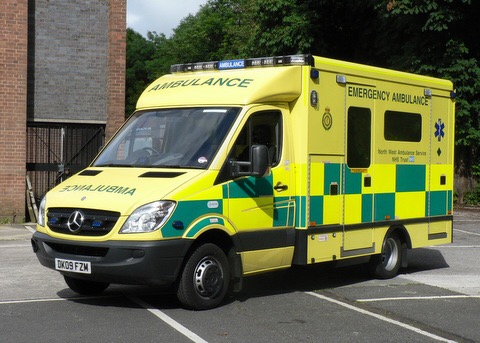 North West Ambulance Service recently reported the hike in calls over Halloween and as we fast approach the Trust’s busiest time of year, the level of 999 emergency calls are showing no signs of reducing.
Director of Operations, Derek Cartwright comments: “In previous years we used to see a peak of calls in the winter and this would then drop in the warmer months before starting to climb again as we approached December. This is no longer the case. We consistently see high levels of life-threatening 999 calls throughout the year so instead of dropping in the summer, it stays the same and then increases even further in the following winter.”

NWAS’ year to date figures show that the Trust is dealing with a 25 per cent increase in ‘Red’ calls – these are those who have a life-threatening or potentially life-threatening conditions and have a national eight minute response target, and this is a huge challenge for the organisation.

Derek adds: “We regularly publish the message asking the public to use us wisely and only in emergency situations and we’re very grateful to those who heed that message, but the non-urgent calls are not rising in the same way as the extremely urgent calls – those that do need an emergency ambulance response. This is by no means unique to the North West Ambulance Service, our ambulance colleagues around the country are seeing similar growth and we have to accept that this is unlikely to change and instead, change the way we operate so we can meet this demand.”

It is widely acknowledged that there is a distinct shortage of Paramedics in the UK and changes to training of new staff has had an impact on staff resources. Filling vacancies has been one of NWAS’ priorities during 2015 and since April 2015, 186 road staff and 52 call centre staff have been appointed. The Trust also recently announced a change in the process which allows easier internal progression for Emergency Medical Technicians (EMTs) to become Paramedics.

In order to free up more resources to attend life-threatening emergencies, the Trust has made a concerted effort to improve its triaging of 999 calls. Improvements made to the organisation’s clinical structure has meant more people can be either treated at home, omitting the need for an ambulance journey to hospital, or be directed to a more appropriate healthcare service such as a walk-in or GP led centre.

For some time now, frontline Paramedics and trained call centre staff have been able to refer callers to Specialist and Advanced Paramedics who can explore the patient’s condition in more detail for those reporting non urgent conditions. This is known as ‘hear and treat’ and ‘see and treat’ and there has been a marked increase in the number of patients who have had their calls dealt with this way and the feedback has been extremely positive.

Community Specialist Paramedics, placed in areas where performance has been particularly challenging, and a dedicated Frequent Caller team have also proved to be of great benefit to patients. They play a positive part working with health providers, volunteer groups and local authorities in making improvements to support networks for those with complex conditions who have a need to regularly call the Service.

Says Derek: “The ambulance service has come a long way from the ‘scoop and run’ service it started out as. Clinical skills have vastly improved and we work much more closely with other support services, as the more help a person with long term conditions receives, the less likely they are to need an emergency ambulance – this in turn frees up those resources to get to emergencies.

“It is true that some patients, with minor conditions or injuries, while they might be in some degree of pain or discomfort, will have to wait some time for an ambulance response or will be advised on a more appropriate pathway of care, as we must prioritise our resources and send ambulances first to those potentially life-threatening conditions.”

To help with winter pressures, 16 additional ambulances and 19 rapid response vehicles have gone on the road throughout the region and volunteer groups such as the Red Cross and St John Ambulance are providing additional support during periods of high activity. Daily performance management meetings are taking place and these also explore the impact that pressures on other services such as the hospitals can have on NWAS.

“It is a circular challenge,” says Derek, “Our life-threatening calls rise, so we attend to and take more people to hospital, this results in a busy, pressured emergency department, which means our handover times can take longer and therefore we can’t get back on the road quickly enough to respond to waiting 999 patients.

“We work very closely with our Commissioners and NHS colleagues to tackle this and the introduction of Ambulance Liaison Officers in hospitals goes some way to help alleviate this pressure.”

When someone calls 999 for an ambulance, they expect a quick response, believing that the national Government target of eight minutes applies to all and that a large, yellow vehicle with flashing blue lights will appear with sirens wailing. Approximately half of the 999 calls received are not classed as immediately or potentially life-threatening and a proportion of these are referred to other services or can wait up to four hours for an ambulance response.

“We appreciate that waiting for an ambulance can be a worrying time,” Derek explains, “People have called us because they are frightened, upset and often, just don’t know who else to ring to ask for help but if the situation isn’t an urgent one, we cannot guarantee that they will be seen quickly or even if they will be seen at all by an NWAS clinician. Our priority will always be those in dire, urgent need, due to having only a finite number of resources, it has to be, but we need the public to help us to help them.

“If an ambulance crew attends to someone with a painful ankle injury – it can’t go to someone who in the meantime, has stopped breathing. If someone calls 999 to request help for an ear infection – a call for a cardiac arrest, where every second counts, takes longer to be answered.

“We’re very proud that during these times of austerity, we have invested in our frontline service. We have increased staffing and vehicles, and we have a wonderful team of dedicated, hard working staff, but these are not the only solution to the challenges we face today. The most effective solution lies with the public we serve and we ask for their support this winter.”