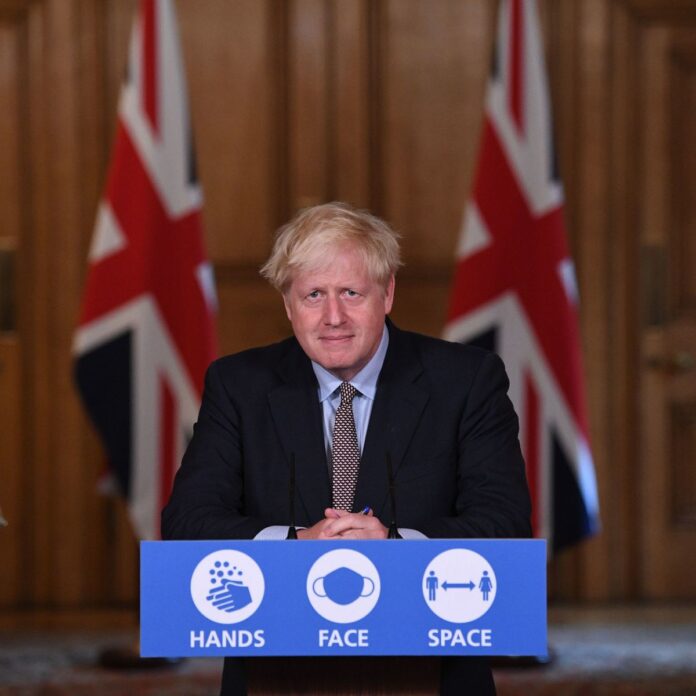 The Prime Minister has confirmed that from Monday social gatherings will be limited to six people, and acknowledged it is “too early to say” where the UK will be by Christmas.

At a Downing Street press conference, Boris Johnson also confirmed a raft of additional measures, including making test-and-trace mandatory in hospitality settings and the use of ‘Covid-secure marshals’, to be introduced in town and city centres and tasked with enforcement of social distancing.

From Monday, Britons must not meet socially in groups of more than six, with anyone who breaks this rule at risk of a fine, dispersal, or even arrest he announced

Flanked by England’s Chief Medical Officer Chris Whitty and Chief Scientific Officer Sir Patrick Vallance, Johnson said that everyone, at all times” should limit social contact as much as possible and minimise their interactions with other outdoors.
“It’s safer to meet outdoors and you should keep your distance from anyone you don’t live with, even if they are close friends or family,”

“In England from Monday we’re introducing the rule of six. You must not meet socially in groups of more than six.

This now replaces the existing guidance on allowing two households to meet indoors and the cap at 30 people.

There are limited exemptions related to support bubbles larger than six, and that hospitality settings and places of worship can take in more than six people overall while Education settings and workplaces are unaffected.

Chris Whitty explained some of the reasoning behind the move saying that in some age groups the rates are now going up really quite sharply.Test positivity has surged among 17-21 year olds since mid-August.

End of lockdown? Not for M.E., says Wigan’s Olivia