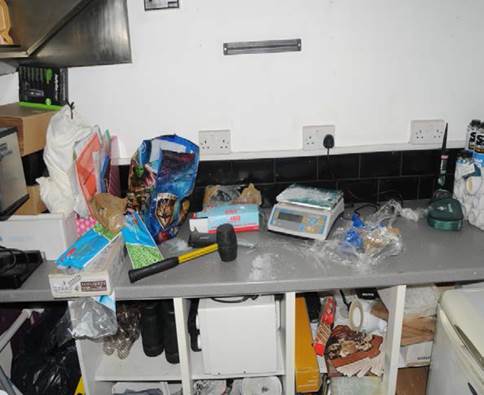 Six people have been jailed for almost 100 years as part of an investigation into a multi-million pound drugs ring.

Five men and a woman were sentenced to a combined total of 98 years in prison as part of Operation Cosmetic,an investigation into the nationwide supply of drugs and firearms by an organised crime group primarily based in Manchester.

The criminal empire unraveled following a three month police investigation led by GMP’s Serious and Organised Crime Group, which resulted in the seizure of cocaine, heroin and MDMA valued at over £2.7 million.

The network was headed up by Gary O’Regan who controlled the operations from southern Spain, before returning to England in January 2018 and continuing his illicit activities from his home in Salford.

Two of his co-conspirators, Paul Higginson and Sam O’Neill, worked on O’Regan’s instructions and made journeys across the country disseminating the drugs as far afield as Sunderland, Middlesbrough, Kettering, the West Midlands and Wales.

O’Regan was the first member of the group to be arrested.  On Wednesday 14 February 2018, a surveillance team observed him parked in a car park in Trafford Park.

A short time later, O’Neill drove in to the car park and got out of his silver BMW X5. He was carrying a white-coloured bag which he handed over to his boss before they both left the car park.

Officers from the Tactical Firearms Unit pursued the crime boss and stopped him on the M62 as he drove towards Liverpool. A white bag was found under the driver’s seat which contained a gun and eight rounds of ammunition.  He was also found to be in possession of a number of mobile phones and a highly sophisticated encrypted mobile device.

Following his arrest, officers continued to investigate the remainder of the group as Higginson stepped up and became the new head of the drugs ring.

The court heard how in February of this year, the group had flown a Hungarian amphetamine expert into Manchester from Germany.

One of the group’s associates, Patrick Warde, drove to a hotel in Heywood and collected the man before taking him to his home address in Middleton, where they were later met by Higginson and O’Neill.

The following day, O’Neill, Warde and the amphetamine expert visited a specialist glass producer, where they spent over £3,000 on lab equipment capable of being used in the production of amphetamines.

On Wednesday 7 March 2018, a surveillance team watched on as Sam O’Neill and his wife Jennifer drove in to the car park of the Grosvenor casino in Salford in their silver BMW X5. Here, they met with Darren Gill and passed him a shoe box with a pink-coloured lid.

The following day, O’Neill was driving Warde’s black Citroen Berlingo northbound on the M6 when he was stopped and arrested by officers. In the rear of the van police recovered 30kg of high purity cocaine, which had been placed in shoe boxes with distinctive coloured lids, some of which were identical to the one handed to Gill the previous day. He was also in possession of a number of mobile telephones, and another encrypted handset.

Following his arrest, Sam O’Neill’s home address was searched and 1kg of cocaine was recovered in the vehicle belonging to his wife. Officers discovered that she had met with Higginson earlier that day in a car park and he had given her the cocaine.

Officers also searched a café and bar on Market Street in Hyde, a property for which O’Neill was the licensee. In the café, police recovered 2 ½ kg’s of cocaine, ½ kilogram of heroin and almost 1kg of MDMA, along with other drug paraphernalia such as scales, vacuum packing equipment and empty kilogram bags. There were also a number of empty shoe boxes, some of which were identical to the one handed to Gill and those recovered in the Citroen Berlingo driven by O’Neill when he was arrested.

On 17 April 2018 officers arrested Warde, Higginson and Gill. Warde was found to be in possession of a mobile telephone and an encrypted handset, as well as £4,000 in cash. Higginson had just over £14,000 in cash and a large amount of designer clothing. Gill had 1/8th kilogram of cocaine hidden inside a cooker hood, and just over ½ kilogram of cannabis in his loft, as well as £12,000 cash.

In total, the street value of the drugs recovered by the police is estimated at £2,788,390.

Officers searched a storage unit which O’Neill had rented and a large amount of chemicals and laboratory equipment – capable of producing amphetamine – was discovered.

Had the chemicals and lab equipment recovered from the storage facility been used, they would have been able to produce over 300kg, which would have an estimated street value of over £3,000,000.

Detective Inspector Lee Griffin, of GMP’s Serious and Organised Crime Group, said: “During this operation we monitored the group closely as they conducted their illicit activities across the country, enabling us to gather evidence through surveillance and unravel the conspiracy.

“It is thanks to the hard work of all the officers in this case that a group of career criminals have been stopped from deluging our streets with such a huge amount of drugs. We have also managed to disrupt an even larger quantity of drugs from being produced and ultimately being distributed nationwide.

“Drugs wreck lives, destroy relationships and blight our communities. Those who are responsible for supplying illegal drugs to vulnerable people deserve no place in our society, and our community is a safer place with them behind bars.

“I hope this sentencing sends a clear message that we will relentlessly pursue those persons who supply harmful drugs and we will go to great lengths to bring them to justice.”

Darren Gill,27,of Anderton Crescent, Chorley pleaded guilty to conspiracy to supply cocaine and heroin and has been jailed for nine years.

Gary O’Regan,34,of Derby Road, Salford was found guilty of conspiracy to supply cocaine. He had earlier pleaded guilty to possession of a firearm and ammunition, and conspiracy to produce amphetamine and has been jailed for 24 years.

Paul Higginson,40,of Metcalf Close, Kirkby was found guilty of conspiracy to supply cocaine. He had earlier pleaded guilty to conspiracy to produce amphetamine and has been jailed for 21 years.

Sam O’Neill,35,of Hattersley Road West, Hattersley pleaded guilty to conspiracy to supply cocaine and heroin, conspiracy to produce amphetamine, and possession of a firearm and ammunition and has been jailed for 19 years and six months.

Patrick Warde,52,of Carruthers Close, Heywood was found guilty of conspiracy to supply cocaine and conspiracy to produce amphetamine and has been jailed for 21 years.

Jennifer O’Neill,31,of Hattersley Road West was found guilty of conspiracy to supply cocaine and has been jailed for four years.