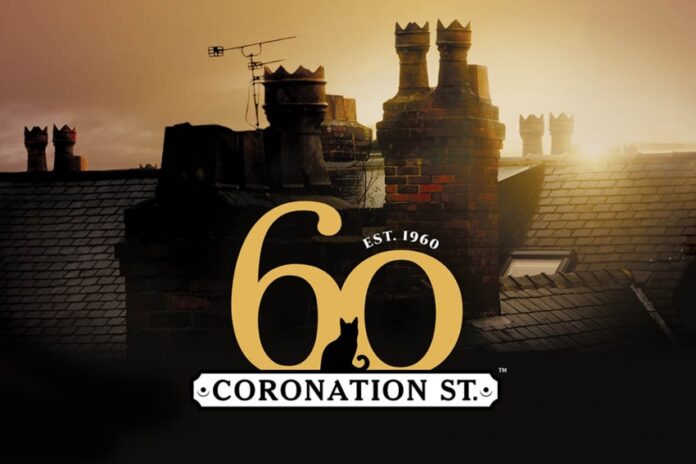 With 60 days to go until December 9th, ITV will be celebrating each day via the soap’s official social media channels with a special message from famous fans, charities, cast members and, of course, the viewers.

As each new message is revealed, we will be one step closer to an anniversary week of sensational storylines, special programmes and much more.

Coronation Street debuted on ITV on December 9th 1960, the creation of Salford born writer Tony Warren, and the rest as they say is history.

And what a history, more than 10,000 episodes later the Guinness World Record holding programme has seen 57 births, 146 deaths and 131 weddings alongside affairs, murders, secrets and lies, and not forgetting that unique blend of pathos and northern humour that makes the show just as popular today as it was all those years ago.

To celebrate this incredible milestone, between now and December 9th, ITV will be screening special shows, publishing an anniversary book, launching new products, unveiling unique social media content and of course at the centre of it all will be a fantastic week of drama on the cobbles of Weatherfield.

The anniversary week will see three storylines reach spectacular conclusions whilst at the same time starting off new chains of events which will take the show into 2021 and beyond.

For months the nation has been gripped by the appalling abuse inflicted by Geoff Metcalfe upon his wife Yasmeen. With Yasmeen on remand charged with Geoff’s attempted murder, the anniversary week will see the end of her trial.  Will justice be done or is the nightmare only just beginning for Yasmeen and Alya?

Meanwhile, two people battle to keep a shameful secret that will ruin their lives and those around them. Nothing stays quiet for long in soaps, and as the week progresses the web of lies and deceit they’ve created threatens to destroy them.

At the centre of the anniversary drama is of course Coronation Street itself as the residents unite to save the cobbles from the dastardly dealings of Ray Crosby. Having bought up most of the property and businesses in the area, Ray is ready to flatten the lot to make way for his new development. As the bulldozers arrive on the cobbles the race is on to save Britain’s most famous street.

With average viewing figures in the UK still topping 7 million per episode, Coronation Street is a worldwide phenomenon, having been sold to a whopping 135 countries and is as synonymous with the UK as cups of tea and Sunday roasts.

Research finds Smokers across the North West more likely than Non-Smokers to be Without...

Manchester Airport lounges have a refresh