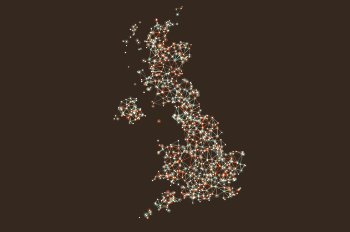 Have you ever thought about all the wasted heat that’s released into our atmosphere from large factories and power stations?

Engineering students and researchers at our Durham Energy Institute have, and they’ve highlighted the large amount of waste heat and potential ways of using it to heat our homes.

Nationally, the total amount of waste heat produced by large industries is 35 per cent more than the heat needed to warm our homes, so the new research has mapped out just how much of this heat there is and where it is.

The study focused on large industries that are mainly powered by natural gas and used process efficiencies and natural gas consumption to determine the amount of waste heat produced.

This data was then mapped according to Local Authority Area to approximate the distribution of waste heat across the UK. The map is compared to population density to determine if available waste heat can be reused in domestic heating.

The amount of heat available depends upon different factors, for example the effect of the Coronavirus pandemic is likely to result in less activity by large industries, so less gas will be used to produce heat. This will lead to a fall in industrial waste heat production.

Additionally, certain regions, such as Yorkshire and The Humber and the East of England have high capacity power stations so they will produce a higher amount of wasted heat. These are also areas with high population densities so there is great potential for waste heat reuse.

But, the study also found that the some larger industries with the greatest available waste heat are amongst the least environmentally friendly as they are all highly dependent on natural gas. Many appear to be reluctant to be part of waste reuse schemes so financial incentives may be required to encourage uptake.

Our researchers concluded that, although the use of waste heat reuse schemes by large industry should be increased, it may not be sustainable and environmentally greener in the long-term due to the fact these industries mainly use energy produced by fossil fuels to generate their heat.

Climate change means we can no longer take the North’s water for granted, according...