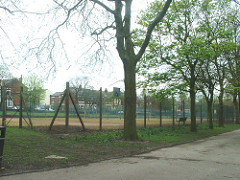 Greater Manchester Police are trying to piece together events last night which left elderly man with multiple injuries in Salford.

The seventy year old was found lying on the ground injured by two members of the public near to Lightoaks Park on Claremont Road around 9.15pm

Taken to hospital it was discovered he had suffered a broken neck bone, a fractured nose and cuts and bruises.He is currently awake and talking.

Police believed the man was walking down Claremont Road when he felt a blow to the back of his head and witnesses described seeing a man running down Acresfield Road nearby.

Despite house-to-house enquiries, a trawl of CCTV as well as victim and witness accounts, it is still unclear exactly what happened and detectives are appealing to residents for more information.

“He was innocently walking near to the park on a night when the warm weather meant a lot of people were likely to still be around.We are desperate to know how this man came about his injuries and would urge anyone with CCTV or dash-cam footage living in the area to please check their cameras.If you saw a man running down Acresfield Road, or if this was you, please contact police immediately.Any information could be the piece of the puzzle we need to get a clearer picture of what happened.”

Details can also be passed on anonymously by calling the independent charity Crimestoppers, anonymously, on 0800 555 111.