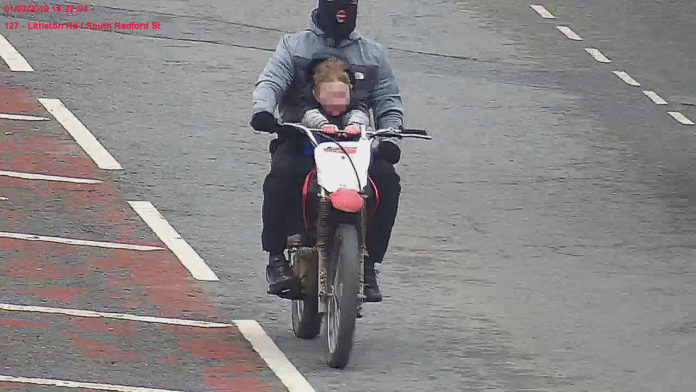 Police in Salford are appealing for information after a man was witnessed riding an off-road bike dangerously with a young child as a passenger on Friday afternoon.

The caller raised concerns about one of the riders who they witnessed speeding and pulling wheelies while having a young child sat on the fuel tank.

Officers attended but the riders had left. A trawl of CCTV identified two men – one who was donning a balaclava – riding bikes on Littleton Road about 2.20pm.

Police are keen to identify the men pictured and are appealing to the public for any information.

PC Steve Williams, from GMP’s Salford division, said: “Although you can’t see the men’s faces, I’m hoping someone might recognise the bikes or know who is behind the mask. So please take a long look at the images.

“Their actions were brazen and reckless, not only putting themselves and other road users in danger but they also put a young child at risk.

“Anything could have happened and ultimately this could have had devastating consequences, not to mention we understand the concerns the use of off-road bikes raise in communities.

“We are desperate to stop this happening again and find those responsible. Please, if you know anything, get in touch with police immediately.”