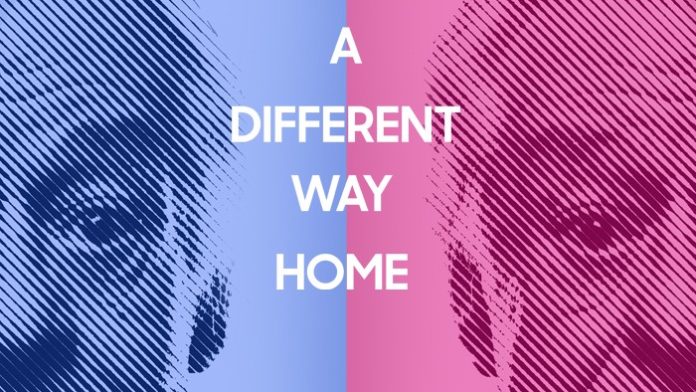 Oldham Coliseum Theatre presents its first restaging of A Different Way Home almost exactly 21 years to the date since its world premiere on the same stage. In this unique production the director of the premiere, Kenneth Alan Taylor, steps into Roy Barraclough’s shoes for the dual role of both Leslie and Maureen, original designer Celia Perkins returns and BAFTA Award winning Noreen Kershaw directs.

In this deeply moving and astutely observed play two monologues from a brother and sister tell a powerful story from two wildly different perspectives. Leslie, who has lived with his mother all his life, tells of the events leading up to her death, unwittingly revealing the extent of his bitterness towards his sister, Maureen. Feeling betrayed and rejected by her family, Maureen tells a different story of grief and isolation.

Told with a Lancashire charm which breathes lightness into dark memories, the two siblings’ opposing testimonies highlight the desperate need for communication and the damaging power of prejudice and suppressed resentment within families.

Jimmie Chinn’s full-length play A Different Way Home is one of the Coliseum’s most popular productions. It started life in 1988 as a one-act radio play on BBC Radio 4, focussing on Leslie, who was played then by Bernard Cribbins. The one act version of the script was dramatized in 1994 on Granada TV with Roy Barraclough stepping into the role. It was at the Coliseum that then Artistic Director Kenneth Alan Taylor asked Jimmie to extend his story to a full length play and the character of Maureen was brought to life – with Roy Barraclough playing both siblings. The full length production made its world premiere at the Coliseum on 30 January 1998, winning two Manchester Evening News Theatre Awards, for Best New Play and Best Actor.

Ahead of rehearsals for the production Kenneth Alan Taylor commented: “This is one of my favourite plays. Jimmie Chinn is on a par in this piece with Alan Bennett in Talking Heads. He has an amazing insight into Northern working class people.”

Kenneth Alan Taylor has performed in over 320 Coliseum productions since his first appearance at the then Oldham Repertory Theatre in 1959. He became Artistic Director from 1978 to 1982, reopening the theatre after a nine-month closure and reconstituting the Oldham Rep as Oldham Coliseum Theatre. He returned as Chief Executive of the theatre from 1996 to 2002 and was presented with the Horniman Award for Outstanding Achievement in Theatre in 1997. Kenneth’s last performance on the Coliseum stage, as Andre in 2017’s North West premiere of The Father, earned the Manchester Theatre Awards for Best Actor and Best Production.

Designer Celia Perkins joined the Coliseum as an Assistant Scenic Artist, going on to become Resident Designer until 2002. She has designed over 30 productions for the Coliseum, ranging from traditional pantomime and musicals to straight plays and comedies. As a freelance designer she retains a close relationship with the theatre as the designer of the renowned annual pantomime and various plays and musicals, most recently Our Gracie.

The Coliseum’s restaging of A Different Way Home will be directed by prolific stage and screen director Noreen Kershaw. Her work in theatre includes Fireflies by Kevin Fegan, commissioned by The Lowry, Salford and Robert Robson, The Price of Everything by Fiona Evans for Stephen Joseph Theatre, Scarborough and Beautiful House by Cathy Crabb for The Library Theatre, Manchester. On television screens she has directed an array of serial dramas including Broken, Scott & Bailey, Moving On and The Dumping Ground. Noreen has been a series director on Coronation Street and was awarded a BAFTA in 2014 for an episode she directed.

Writer Jimmie Chinn grew up in Middleton, just a few miles from Oldham. He acted with several amateur groups in the area from an early age, during which time he cemented his life-long connection to the Coliseum. Alongside his plays for stage and radio, Jimmie contributed to Emmerdale Farm and Coronation Street for many years.