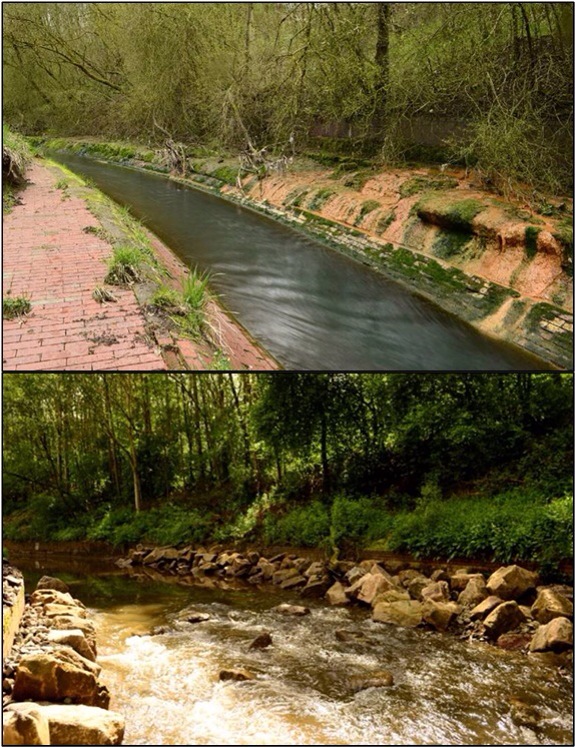 A project to restore Manchester’s historic River Medlock has been recognised at two prestigious awards ceremonies in just two days.

The project won a Wild Trout Trust Conservation Award at a ceremony at the Savile Club in London last Wednesday and Just a day earlier, was recognised by the Construction Industry Research and Information Association’s (CIRIA) Big Challenge, which encourages businesses and organisations to add new biodiversity enhancements to their construction projects.

The Medlock was an infamous brick lined sewer running through the heart of Manchester serving no benefits for people or wildlife.

The River Medlock Restoration Scheme in Clayton Vale aimed to remove the bricks, restore the channel and bring life back to the river.

Environment Agency project manager, Olly Southgate, said: “This lost river, which was once the catalyst for the industrial revolution in this part of Manchester, was neglected for 100 years. A community member said to me before the project started ‘what are you doing, this is just our drain you’ll never get anything living in there!’

“But we were ready for the challenge, and The Environment Agency – together with the Irwell Rivers Trust, Manchester City Council and Groundworks – was determined to bring the river back to life.

“The project involved removing the brick lining, widening the channel and removing two weirs from a 350 metre stretch of river, and in the process it turned from a virtual no-go zone for wildlife and people, to a thriving habitat for animals and a recreation space for local people.

“We have already seen rising Brown Trout in the restored section, Kingfishers catching Minnows and even Roe deer drinking at the water’s edge. Not one of these events has been seen on this river for over 100 years!

In response to a catastrophic flooding event in 1872 that washed hundreds of bodies from a local cemetery into the River Medlock, work began on a red terracotta-brick channel, which has since carried the river between the park and adjoining cemetery.

This sewer-like sterile environment provided limited, if any, in-channel or bankside habitat, and fish numbers were at ‘0’ (results of a pre project fish monitoring survey) along most of its reach. Not even hardy Minnows or Sticklebacks could survive in the brick lined channel.