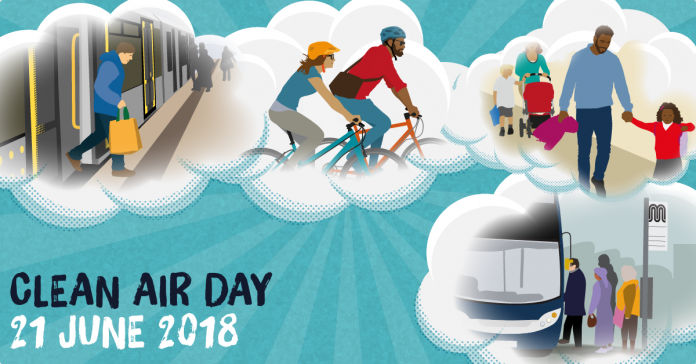 Young people across Greater Manchester are gearing up for a national day of action to tackle the growing threat of polluted air in our towns and cities.

The second Greater Manchester Clean Air Day takes place on Thursday 21 June and thousands of school pupils will have the chance to take part in a creative competition to drive home the dangers of poor air quality.

Transport for Greater Manchester (TfGM) is inviting all local secondary and primary schools (more than 800) to get involved by creating a radio or video advert.

Schools can now download lesson plans and other resources on the Clean Air Day schools portal and register for an interactive digital workshop.They’ll join the call for people right across the region to get involved by pledging to take individual action to help cut air pollution.

Greater Manchester Mayor, Andy Burnham, said: “It’s not an exaggeration to say that poor air quality is one of the biggest – and deadliest – challenges of the modern age.I’m working with local councils and transport and health trusts to make sure we’re doing everything we can to tackle this problem. But the stark truth is, we can’t succeed alone.

“On last year’s first ever Clean Air Day we saw thousands of people pledging to make changes to help clean up our air, from car sharing to using greener transport more, or even working from home where possible.This year I want to see even more people take long-term action. Every single one of us needs to think about making small lifestyle changes to help clean up the air we all breathe.

“It’s fitting that local schoolchildren will be at the heart of activities for Clean Air Day. They’re more vulnerable than most to air pollution, not least due to the fumes they breathe in every day as thousands of parents still leave their car engines running at school gates.

“I hope that Clean Air Day will really focus attention on these important issues and, more importantly, encourage us all to take action.”

Councillor Alex Ganotis, Greater Manchester Combined Authority lead for environment, green spaces and air quality, and leader of Stockport Council, added: “It’s vital that we continue to raise awareness of air pollution as a serious challenge for us to address, and this must go hand-in-hand with all the work Greater Manchester is doing to improve our air quality.

“Airborne pollution is largely invisible to the eye, so it’s even more important that we use campaigns such as Clean Air Day to get messages out to the public that air quality is a major issue and that we all have a role to play in dealing with it.”

Road transport is largely responsible for some of the most dangerous pollutants in Greater Manchester, including nitrogen dioxide and particulates.

Vehicle exhausts can produce harmful gases and tiny particles of soot and other matter that cause health problems and harm the environment.

It’s estimated that up to 2,000 people die prematurely in Greater Manchester each year due to air pollution, among 40,000 people nationally.

Events will take place across Greater Manchester on Clean Air Day, including free lung-health checks; and the chance to see or try out the latest electric cars and bikes in Manchester City Centre’s Exchange Square.

Pledges to take action can be made at www.tfgm.com/air and include: leaving the car at home just one day a week; car-sharing when possible; working from home regularly; walking and cycling more; and encouraging friends to do the same.

Follow #GMCleanAirDay on social media for the latest news on what’s happening in Greater Manchester.

Marks and Spencer to launch its fill your own container range at Manchester City...