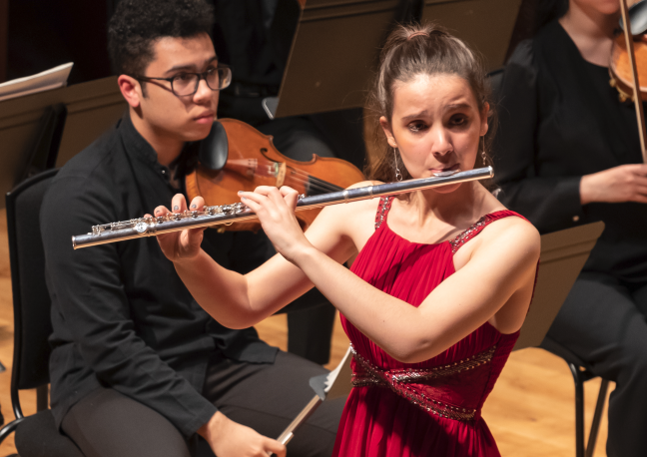 The UK’s leading young musicians – at Chetham’s School of Music in Manchester – have returned to the stage to launch their first full season of live concerts since before the pandemic.

Chetham’s, in Manchester, is home to more than 300 of the world’s most talented young musicians, aged 8-18.

The performers took to the stage at The Stoller Hall in Manchester, launching Chetham’s new autumn season of concerts, which includes full orchestral performances alongside free lunchtime concerts every Tuesday – Thursday throughout November and December.

Chetham’s was the first youth orchestra ever to play Gipps’ Symphony No. 2, in a programme that celebrated both pioneering female composers and Black History Month, with a performance of Fairtrade, composed by MOBO shortlist nominated British cellist and performer Ayanna Witter-Johnson.

“For our remarkable performers to be able to return to The Stoller Hall stage – beginning a full autumn series of public concerts in front of live audiences, after more than 18 months of pandemic delays – was really special. It was a moment they’ll never forget.”

Chetham’s School of Music – the UK’s largest specialist music school – is a charity, with a mission to nurture young musicians regardless of background or financial situation. More than 85% of Chetham’s students are supported by bursaries, funded by the UK Government’s Music & Dance Scheme and individual donations.

Tickets for Chetham’s autumn-winter season concerts are available to book online at www.chethamsschoolofmusic.com