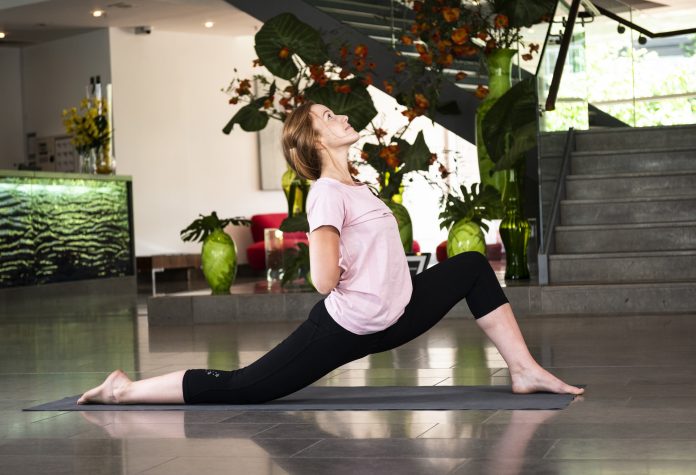 To celebrate International Yoga Day this Thursday, The Lowry Hotel has launched early morning yoga classes along the River Irwell.

Yoga mats, harem pants and subtle postures at the ready, the five-star Lowry Hotel is offering the chance to relax the mind and body in celebration of International Yoga Day on Thursday 21st June.

The hotel which lies on the banks of the River Irwell has introduced early morning classes on the piazza to ease the minds of those with a full day ahead.

Lianne Daly of Yoga Manchester visited the hotel to ensure that guests and locals are able to channel their inner zen with breathing techniques and replication of positions such as the downward dog. Lianne who attained her Yoga Teacher Training in Thailand will be teaching the early morning classes at the hotel for the foreseeable.

The popularity of yoga in the UK has spiked in recent years with many taking time out of their day to participate in regular yoga classes, as research suggests that yoga is a safe and effective way to increase physical activity, strength, flexibility and, balance.

Adrian Ellis, The Lowry Hotel’s General Manager, said: “As we have the piazza and such a beautiful setting on our doorstep, we thought there would be no better way to celebrate International Yoga Day then introducing morning yoga classes on the piazza with the classes being taught by one of Manchester’s most experienced yoga instructors.

“Yoga has many benefits to a person’s health and mind, which is why The Lowry Hotel thought it would be a great idea to introduce the classes.”

The first of the early morning sessions which will start at 7am on Thursday in celebration of International Yoga Day, with the session being free for all who are interested.

“Deck the Bus with Meat and Lust”

James plunge into the Forest