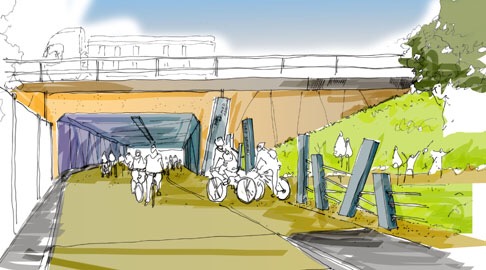 Work has started on a new £1 million cycleway and pedestrian in Salford.

The new Port Salford Greenway route will follow the M60 to transport people from Winton, Peel Green and Brookhouse to thousands of new jobs at Port Salford and those in and around the Trafford Centre.

The 1.5 kilometre long, three-metre wide path will feature improved landscaping, tree planting and biodiversity. Initial plans have now been redesigned along the traffic-free cycling and pedestrian route so it can be used by people with prams and those in wheelchairs.

Key features of the designs involve creating high quality walking and cycle paths, constructing a new footbridge, refurbishing the motorway subways at either end of the route, and opening up views.

Signs will be installed to help direct people onto the route and to key destinations, and striking entrance features will provide a friendly welcome to walkers and cyclists.

The £1 million project is being funded by the Department for Transport’s Local Sustainable Transport Fund, and with support from the Atlantic Gateway and Salford City Council. It will be finished by April 2015.

Salford City Mayor Ian Stewart said: “This new cycleway will not only provide easy access to thousands of jobs at Port Salford, but also provide a new attractive path where people can enjoy a leisurely walk.

“We now have more than 7,900 businesses employing over 116,000 people and huge regeneration schemes and redevelopment schemes that will create even more jobs. Salford is a city that’s really going places.”