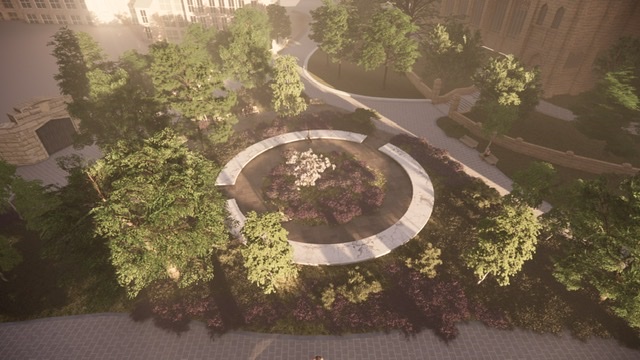 Work starts today to construct the memorial to those who lost their lives in the 22 May 2017 Manchester terror attack.

The Glade of Light is designed to be a living memorial – a garden space for remembrance and reflection. Work to create the tranquil environment, with a planting scheme planned to ensure year-round colour and reflect the changing seasons, is due to be finished by December this year.

This means that the memorial will be complete in time for the fifth anniversary of the attack in which 22 people were killed.

Their names will be set in on the memorial’s centrepiece white marble ‘halo’ with personalised memory capsules filled by their loved ones held within the stone.

Extensive work has taken place to ensure that the memorial is fully accessible.

The memorial will be located between Manchester Cathedral and Chetham’s School of Music, at the foot of Fennel Street where it meets Victoria Street.

Families of those who lost loved ones in the attack have been consulted and kept informed during the memorial process, including on the appointment of designers BCA Landscape and Smiling Wolf. The work will be overseen by construction firm Galliford Try.

Sir Richard Leese, Leader of Manchester City Council, said: “This memorial will be a lasting tribute to those who lost their lives on that devastating night. They, along with the many others who were left physically and mentally scarred by the attack, will never be forgotten.

“I hope the Glade of Light will provide some comfort to the loved ones of those who were killed and everyone who was touched by the events of that night as a place of peace and reflection in the heart of the city centre.”