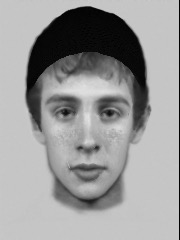 The incident happened around 8.20pm on Saturday on Manchester Old Road near to the junction of Wells Street.

The man followed the woman before he is believed to have restrained her using the hood she was wearing before sexually assaulting her and pushing her to the floor.

The victim was able to get back up and run away from the man before contacting police.

The man is described as white and in his 20s, slim build, around 5ft 3ins tall with curly ginger hair and a spotty complexion.

Detective Constable Andrew Kiddie, of GMP’s Bury division, said: “We are urging members of the public to view this image and come forward with any information that could help us identify this man and bring us closer to speaking to him about this incident.

“An attack of this nature is abhorrent and completely unacceptable and we are dealing with this case with the upmost importance.

“Our specialised officers are keeping in close contact with the victim at this difficult time and are ensuring she has all the support that we can offer while trying to bring her attacker to justice.”