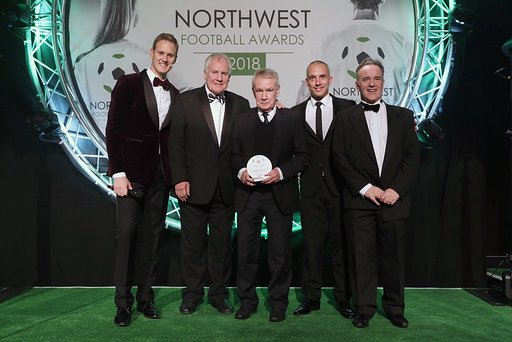 The winners of the Northwest Football Awards 2018 were announced at the hugely anticipated ceremony last night.

Over 500 guests attended the glamorous black-tie event hosted by the BBC’s Dan Walker at The Point at Emirates Old Trafford, Manchester.

Winners were named in eight player categories as well as a raft of other honours including community categories, business and the highly coveted Goal of the Year as voted for by the fans.

Before legendary commentator John Motson took to the stage the first Special Recognition award of the evening went to Dick, Kerr Ladies FC for their services to Women’s Football in commemoration of the 100th anniversary of the end of the First World War.

Dick, Kerr Ladies FC was one of the first known women’s association football teams in England and have been fondly known as the greatest ever women’s team – and made up of a group of women factory workers who drew crowds of up to 53,000 at Goodison Park to raise money for wounded soldiers.

Voted for by fans on social media, the Goal of the Year award went to Liverpool Football Club’s Alex Oxlade-Chamberlain for his stunning goal against Manchester City.

The Fabrice Muamba Award for Outstanding Service to Football Medicine and Performance, in association with the FMPA went to Grant Downie, OBE from Manchester City Football Club.

Henry Mooney from Everton in the Community won the Unsung Hero accolade. Henry has been pivotal in the creation of a number of projects at Everton in the Community, including securing the funding to start the NCS Programme supporting young people, the Stand Together project helping socially isolated adults and Pass on the Memories project to support people living with dementia.

Undoubtedly the man to watch last season, scoring 32 goals in only 36 appearances, the Premier League Player of the Year went to none other than Liverpool Football Club’s star striker Mohamed Salah.

Following in James Milner’s footsteps as the second ever winner, this year’s Impact Award went to ex-Liverpool and Burnley Striker Danny Ings. Now at Southampton, Ings has received the award for his continued work and support of disability sport in the region.

Nicolas Otamendi has extended his City contract until 2022